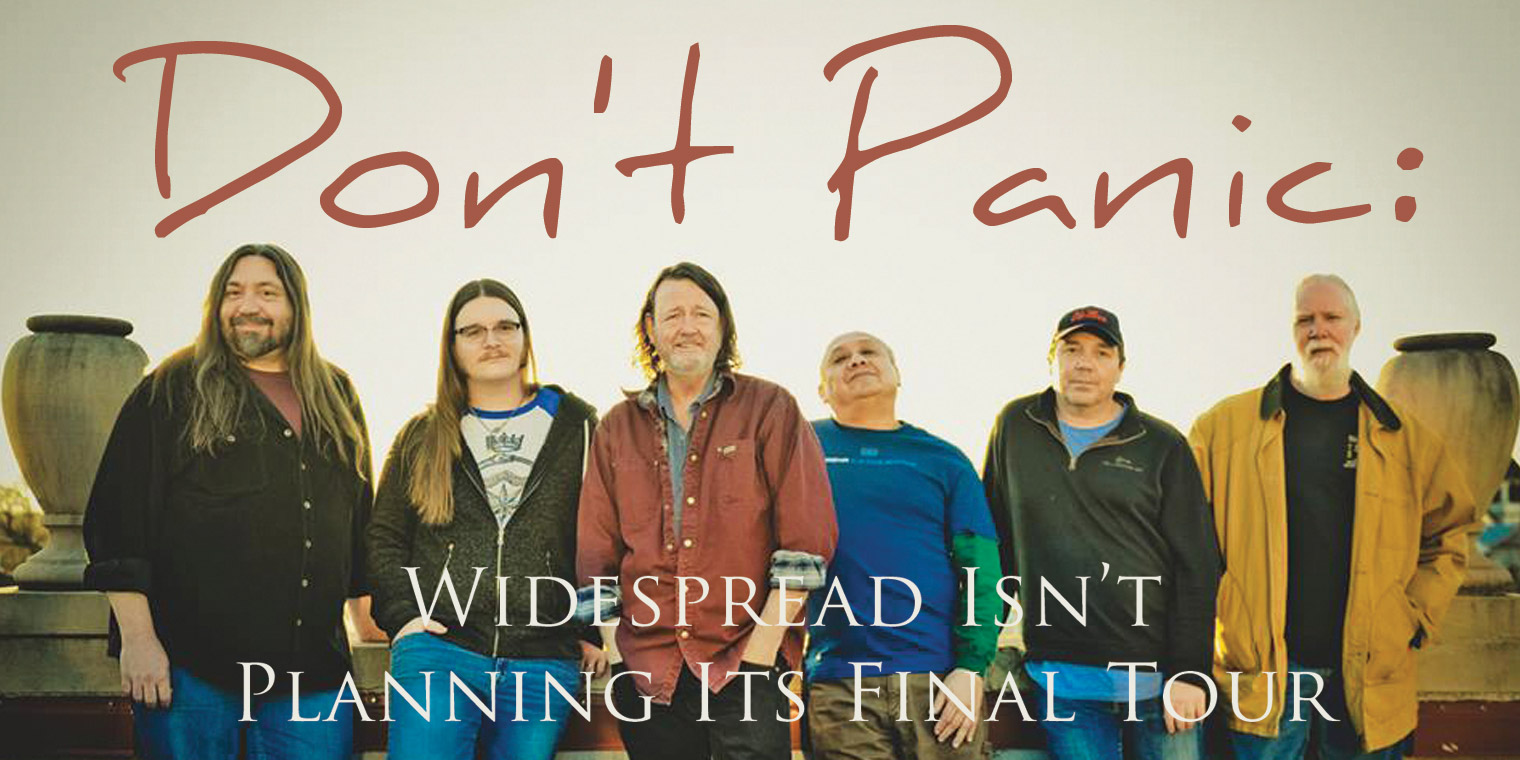 As one of the most traveled and popular jam bands for the past three decades, Widespread Panic has been all over the country and enjoys heading back to some of its favorite locales. That will be the case when the Athens, Ga.-based sextet heads to the Warner Theater for two shows, Sept. 6 and 7.

And even though reports came out that Widespread Panic was considering retiring from the road after its current tour comes to a close, frontman John “JB” Bell admitted that things got out of hand with such talk.

“Our plan is maybe to just dial it down a bit and maybe not do as many shows, but we’ll still be out playing from year to year,” he says. “Some of the guys just wanted a little breathing room to enjoy our families and pursue some other non-Panic things that any of us feel drawn to.”

Along with Bell, the band consists of Jimmy Herring on guitar, John “JoJo” Hermann on keys, Domingo S. Ortiz on percussion, Dave Schools on bass and Duane Trucks on drums.

“We don’t follow the rules by trying to create a commercial Top 40 song. We’re not concerned about whether a song is radio-worthy or not,” Bell says. “We wanted to express ourselves the way we wanted to express ourselves and not the way some record company wanted us to be represented. When you put your signature on the album, that’s your album. People listen to it and get a sense of connecting with the band.”

The band first connected in college at the University of Georgia, with the simple intent to have fun and play music they loved.

“We weren’t thinking of writing a big hit record or having a long career. We just wanted to see how long we could stretch out this ‘having fun’ idea,” Schools says. “There were some things we did in the early days that worked—sort of a nod to REM—we wrote songs together and gave credit equally. We collaborate a lot, and it’s like a team. It seems to really work for us.”

Widespread Panic cut its teeth on the southern bar circuit in 1986 and became known for its incredible live shows and jamming songs. By the late 1990s, the band was a regular at the HORDE Tour, Bonnaroo Fest and other major festivals around the country.

The band went through some hardship with the death of guitarist and co-founder Michael Houser in 2002 from pancreatic cancer, but it has continued to pay tribute to his vision and evolve its sound.

“In the past dozen years, we have had three different guitar players, and bringing in Jimmy seven years ago has been a massive evolution for us,” Schools said. “If you haven’t seen the band in 15 years, you might get a glimpse of the old things, but you’ll experience the new, and bam, get on your feet again and have fun.”

With 30 years behind them in the business, Widespread Panic is still hungry to be the best band they can be, every single night, for their loyal fan base.

Over the band’s impressive run, it has released 12 studio albums and 43 live albums, selling more than 3 million copies as one of the most successful touring acts in the world. It’s also broken attendance records at major venues throughout the country.

To commemorate Widespread Panic’s 25th anniversary in 2011, the State of Georgia’s Senate and House of Representatives passed resolutions honoring the group for its music, service, charity and longevity, while they were also inducted into the Georgia Music Hall of Fame.

“We acknowledge this is a milestone few groups get to achieve,” Bell says. “It’s like Hemingway’s ‘Old Man and the Sea.’ Every time we go out there, we learn more tricks, bring that knowledge with us, and then apply it. We’re way more experienced, focused and to the point, but still willing to stretch out without wandering too much.”

AUTHOR: Keith Loria is a freelance writer who writes regularly about sports, business, entertainment, and the arts. When he’s not writing, the Oakton work-at-home dad can
be found playing with his daughters Jordan
and Cassidy.