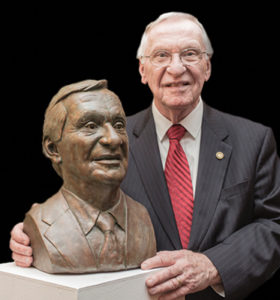 “… a greater appreciation of the need for a multimodal transportation system for our region.”

Mission Accomplished! That was the theme of the 20th annual meeting and reception of the Dulles Corridor Rail Association (DCRA) held at the Sheraton Reston on January 4, 2017. More than 100 members and guests, including elected officials, helped the association celebrate achievement of its chief mission—to advocate rail in the Dulles Corridor.

DCRA Chairman Kenneth R. Plum, and President Patty Nicoson were both honored for their leadership of DCRA for the past 18 years. Former Virginia Governor George Allen praised Plum’s leadership. When he was Governor, Allen said there was agreement that the rail line needed to go to Loudoun County, that it shouldn’t just have a rail yard for maintenance. Everyone agreed it needed an actual rail station built to welcome commuters. He noted that the Silver Line has already had great success and it would become even more valuable when completed for economic development, job growth, and competitiveness for Virginia.

Virginia Department of Rail and Public Transportation Director Jennifer Mitchell said we can all declare success with this project. She noted that many rail projects never reach construction because they do not have an advocacy group like DCRA—a tight knit, well organized network of business leaders and elected officials working together.  This was the secret of success for this project, she noted.

At this January meeting, the DCRA Board of Directors voted to merge with the Northern Virginia Transportation Alliance (NVTA) going forward to represent transportation interests for the region.

DCRA was founded in 1998 by Delegate Ken Plum and other members from the Reston Transportation Committee; area residents including Patty Nicoson, Joseph Stowers, Steve Cerny; and members of the business community.

Delegate Plum’s concern was that road building alone would not meet the long-term needs of the region—particularly with Reston located in the middle of the corridor. Short-term solutions like widening roads, more buses, bus rapid transit, or light rail would only be short-term fixes, some of which might interfere with adding substantial infrastructure in the future.

The ensuing years were filled with much debate, fits and starts, ups and downs before an extension of Metro from West Falls Church into Loudoun County was finally approved as the preferred local alternative. Federal funds were approved, special tax districts were set up, and agreements and contracts were signed to make the Silver Line a reality.

“As a founder of DCRA I felt some sadness at the consolidation of the organization into another entity with a broader purpose, but at the same time I was very pleased with the greater meaning of the merger,” said Delegate Plum. “On the one hand, the merger with the Northern Virginia Transportation Alliance (NVTA) represented a real ‘mission accomplished’ for DCRA, and on the other hand it reflected a greater appreciation of the need for a multimodal transportation system for our region.”

For DCRA members, the completion of Phase 1 and its operation and the contracting for Phase 2 to be completed by 2020, meant that the work on its mission had been completed, Plum advised. While issues about maximizing the use of the rail system and access to it remain to be fine-tuned, those matters are best resolved within the framework of a multimodal approach.

According to Plum, the Northern Virginia Transportation Alliance has moved beyond its road-building focus of the past to a more multimodal approach that will support the Silver Line while at the same time reducing congestion and supporting the many ways that people choose to travel.

DCRA would never have been able to declare victory without the active support of the many individuals, organizations and businesses that supported its mission, Plum went on to explain. They joined together in the “Dulles Rail Now!” campaign at a critically important time. They sent faxes to key decision makers followed by email in more recent years; held educational seminars for residents and the business community to enhance understanding of transit-oriented development; and cajoled, flattered, and persuaded political leaders to support the project.

Key to its successful operation was President Patty Nicoson who joined the organization at its very beginning and continued with it until its victory celebration. She came to the organization with experience as a planner when Metro first came to the District of Columbia and later worked for Arlington County when Metro arrived there. Her persistent but reasoned approach may have been the most important element of DCRA completing its mission.

“It is about improving the quality of life in the region”

“For the past 30 years, NVTA has been committed to improving the quality of life in our region by championing multimodal transportation infrastructure,” said CEO David C. Birtwistle. “We applaud the success of the DCRA. The rich potential of the Dulles Corridor is much stronger due to their efforts.”

Birtwistle went on to say that Dulles Corridor rail has been a long-standing Alliance priority. “We accept the mantel of the DCRA to continue advocating for world class metro service as well as robust access to the new Metro stations. The ultimate success of the Silver Line is dependent upon maximum accessibility to it as well as safe and reliable service on it.”