The Fairfax County Board of Supervisors has given the green light to a plan to build a 283-unit apartment building as well as 13 townhouses at 1831 Michael Faraday Drive.

The 3.8-acre property currently has a one-story building on the site, and it is located just a third of a mile from the Wiehle-Reston East Metro station. Rooney Properties is the developer behind the project.

It’s part of a real estate boom in the Michael Faraday Drive area. The lot is bordered on the east by another Rooney Properties proposal for 175 apartments and 13 townhomes, and on the west by a 1.6-million-square-foot lot owned by EYA/JBG that is planned for a mixed-use development.

“The hottest real estate in Reston is now near the Wiehle-Reston East Metro station and Michael Faraday Drive is at the center for development proposals east of the station,” the county said in a statement. 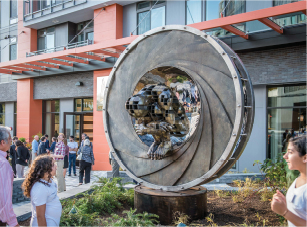 “Convergence,” a bronze and stainless steel work that shows a human figure emerging from the lens of a camera, was debuted in front of a cheering crowd at Aperture (11410 Reston Station Blvd.). The 11-foot-tall bronze sculpture, displayed at the intersection of Reston Station Boulevard and Metro Center Drive, was created by Reston-native artist Zachary Oxman. Oxman was also the sculptor of Lake Anne Plaza’s “Untold Stories” (aka “Bronze Bob”) and has had his work commissioned by DC officials and presented as diplomatic gifts.

“This opportunity is very unique and very special to me, because I do have such a strong connection to Reston,” Oxman said. “Public art has a unique way of not only adding visually to a community, but it also offers the opportunity to share stories about life and to inspire personal thought and reflection for those who experience the art.”

The 9,365-square-foot restaurant also features a 522-square-foot mezzanine area. It has “a lively tasting room and market, indoor dining for 196 guests, outdoor dining for seating for 146, and a private event space that can accommodate up to 44,” according to a recent press release from the restaurant. More than 200 employees were hired this summer.

Potomac River Running in Falls Church has relocated to Maple Ave. in Vienna. The new location offers a treadmill to use during shoe fittings and lockers for those heading out on the W&OD Trail.

The Tysons Pimmit Regional Library was reopened to the public on October 14, 2017.

The Vienna Community center reopened from the renovation and expansion project on October 2nd.