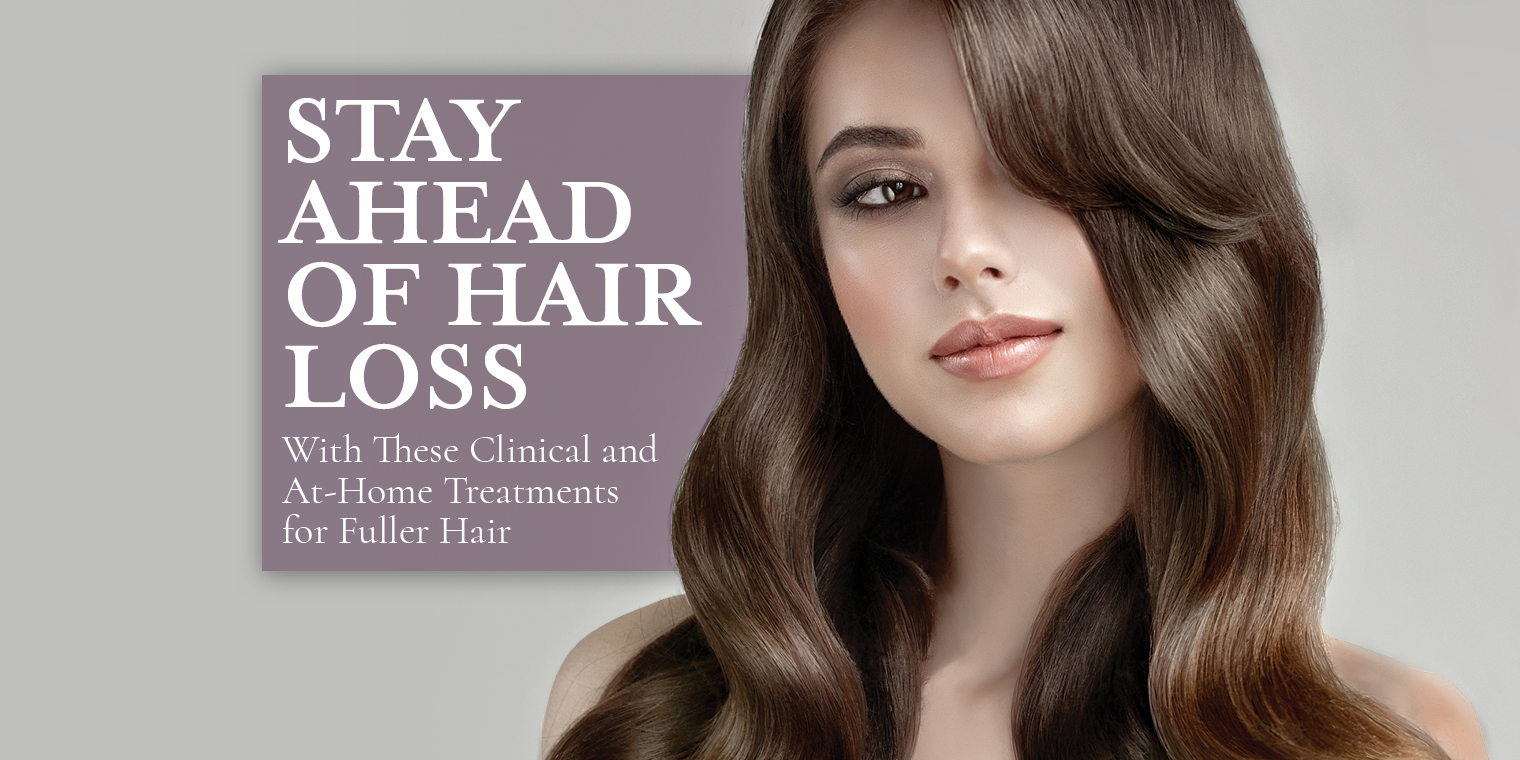 According to the American Hair Loss Association, up to 40 percent of women in the United States experience hair loss. The causes vary and may be due to stress, pregnancy, menopause or health conditions such as lupus, hypothyroidism or iron deficiencies. The American Academy of Dermatology says the most common cause is female pattern hair loss (FPHL), also known as androgenetic alopecia, a hereditary condition which usually becomes noticeable in a woman’s 40s, 50s or 60s.

If you’ve noticed your part looks wider, there’s more hair in your brush or your ponytail feels smaller, visit a dermatologist to determine the cause of your hair loss. It is important to identify the cause so you can pursue the most effective treatment.

Low level laser therapy (LLLT), also called cool laser or red light therapy, stimulates the hair follicles and increases blood flow to the scalp by more than 50 percent, according to the Astoria Laser Clinic & Med Spa in Vienna. The treatment works on all areas of the scalp and has been proven to stop hair loss and regrow hair. Laser therapy has been shown to be particularly effective when used in conjunction with hair transplants, but it is also effective on its own.

Nuha Handoush, senior licensed LME clinician at Astoria, recommends 10-16 laser treatments once per week for best results. “You can expect to see results four months after the last treatment,” she said. She recommends one treatment per month thereafter to sustain the results.

Hair treatment clinics and spas have medical-grade lasers that are much more powerful than at-home devices. However, if cost is a concern and you’re committed to being diligent about using an at-home system, they are easy to use and effective, although results will take longer.

There are several at-home LLLTs on the market, including those from Theradome and iRestore. Both of these look similar to a bicycle helmet. The Theradome should be used twice a week for 20 minutes at a time and the iRestore every other day for 25 minutes, but you have the advantage of using it in the comfort of your home while you’re reading or watching TV. The iRestore claims you can expect to see visible growth in three to six months, and the Theradome in six to nine months.

As mentioned above, PRP can be used in conjunction with microneedling to stimulate hair growth. With PRP, a technician draws a vial of your blood and spins it in a centrifuge to extract the plasma. Then ingredients are added, and it’s injected into your scalp at intervals.

According to Trichological Associates, the Hair Loss Clinic in Alexandria, PRP stimulates natural hair growth, especially if the formula contains growth factors such as platelet derived growth factor and vascular endothelial growth factor. Clinical trials of PRP for hair growth have been inconclusive, in part because each practitioner adds different ingredients and in different amounts, but, when used in conjunction with microneedling, laser treatments or hair transplants, the results have been positive.

Minoxidil remains the only FDA-approved topical product for treating hair loss. It does not work for everyone, but it is effective for treating FPHL. The results are only sustained as long as you keep using it. It does have some risk of side effects, one of the most common being unwanted facial hair growth.

Microneedling is a process often used for facial skin rejuvenation in which tiny needles are rolled over the skin creating micro injuries. In response to these injuries, your body increases collagen production. When used on the scalp, microneedling increases the production of growth factors and stem cells that can stimulate hair growth.

Microneedling on its own has shown mixed results, but when it’s combined with topical treatments, the channels that the needling opens up in the scalp allows the topical treatments to penetrate deeper, enhancing their effectiveness, so it makes sense to use minoxidil or platelet rich plasma (PRP) along with microneedling for maximum results.

“With scalp needling, we infuse a specific GF Hair Complex that mimics plasma in the body, which stimulates hair growth. We also recommend using minoxidil on a repeated basis at home to maintain hair growth,” said Handoush.

A hormone called DHT restricts the blood supply to hair follicles, which is a common cause of hair loss. This shampoo contains DHT blockers to ward off hair loss.

Herbal infusions in the oil stimulate the scalp and hair follicles, increasing blood circulation, strengthening and protecting the hair and fighting hair loss.