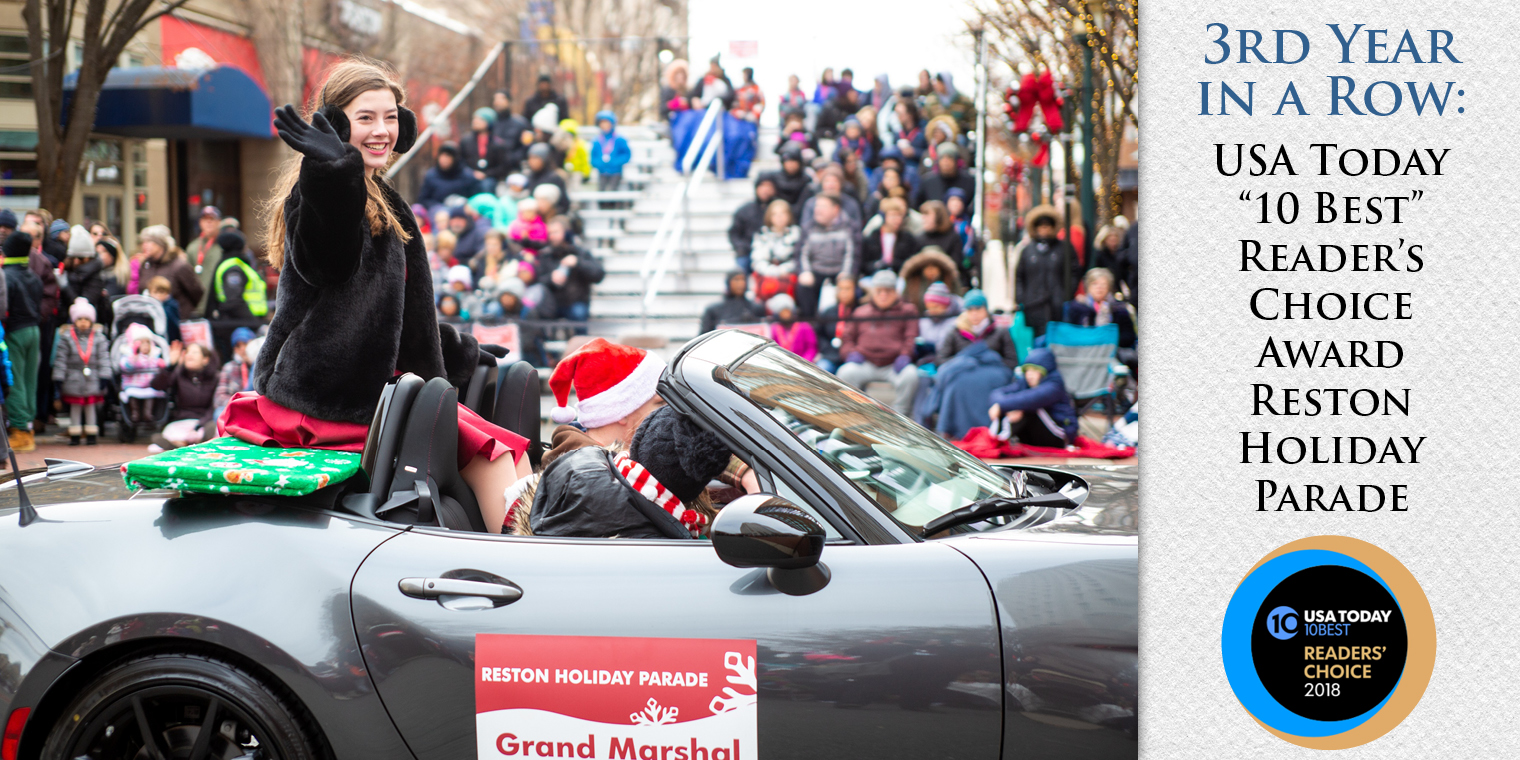 Reston Town Center is proud to announce that Reston Holiday Parade has been voted as one of USA Today’s “10 Best” for the third year in a row. After four weeks of Readers’ Choice voting that ended on December 10, USA Today has now revealed the top ten Best Holiday Parades with Reston Holiday Parade at #5 in the list of impressive parades around the nation. See the 2018 results at https://www.10best.com/awards/travel/best-holiday-parade/

The 28th annual Reston Holiday Parade was presented on Friday, November 23 with a theme of “Winter Wonderland” as a highlight of a full day of cheer and charity to launch the season. Spectators came from near and far to see Macy’s-style balloons, dancers, cars, characters, community groups, marching bands, dignitaries, Santa and Mrs. Claus in a horse-drawn carriage, and much more in a one-hour, half-mile, one-of-a-kind procession along Market Street. Before the 11:00 a.m. start of the parade, 10,000 commemorative jingle bells were handed out to children along the route. Angie Goff and Doug Kammerer of NBC News4 were Masters of Ceremony at two VIP grandstand locations, and 14-year-old nationally-known actress Sissy Sheridan of Reston served as the Grand Marshal. 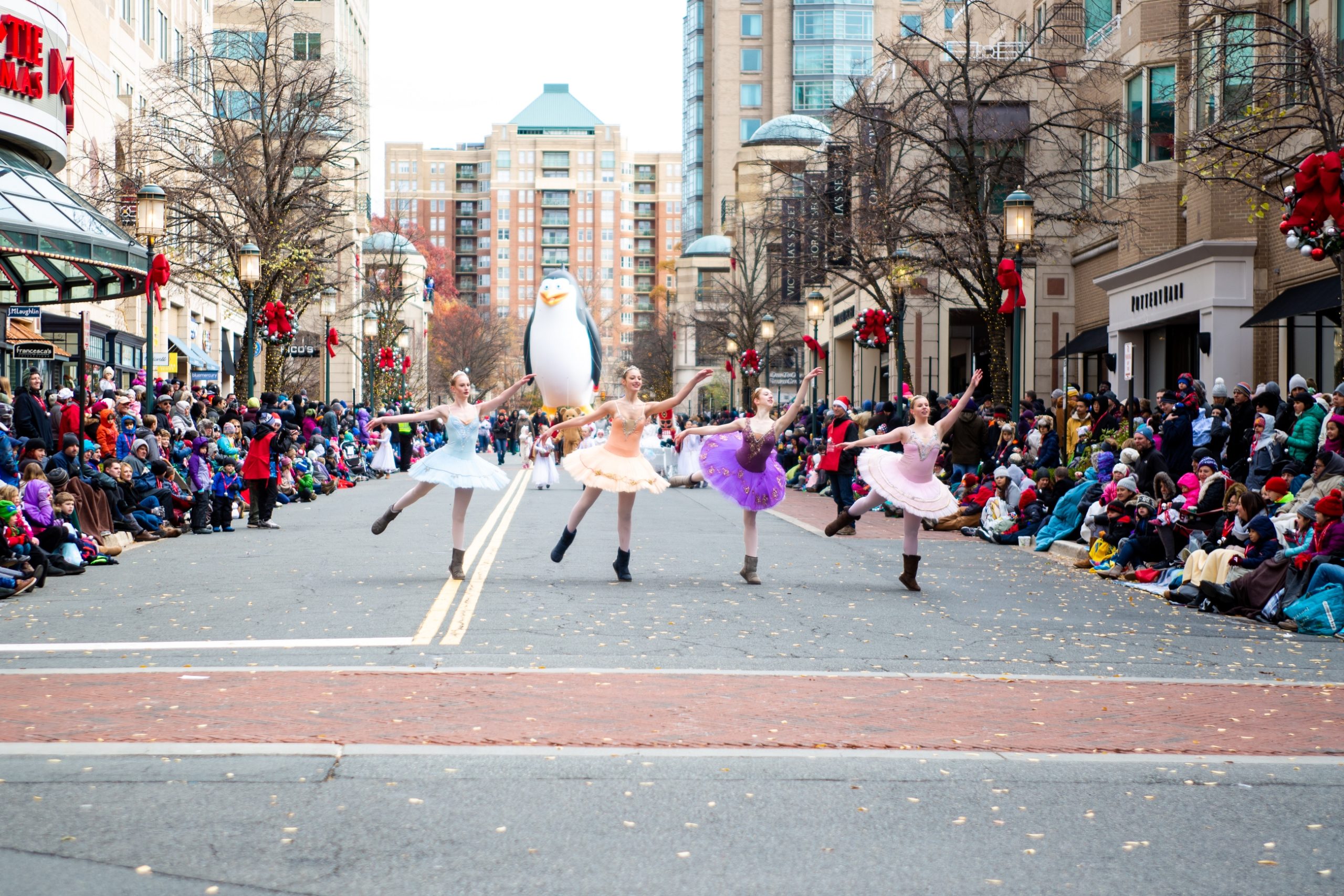 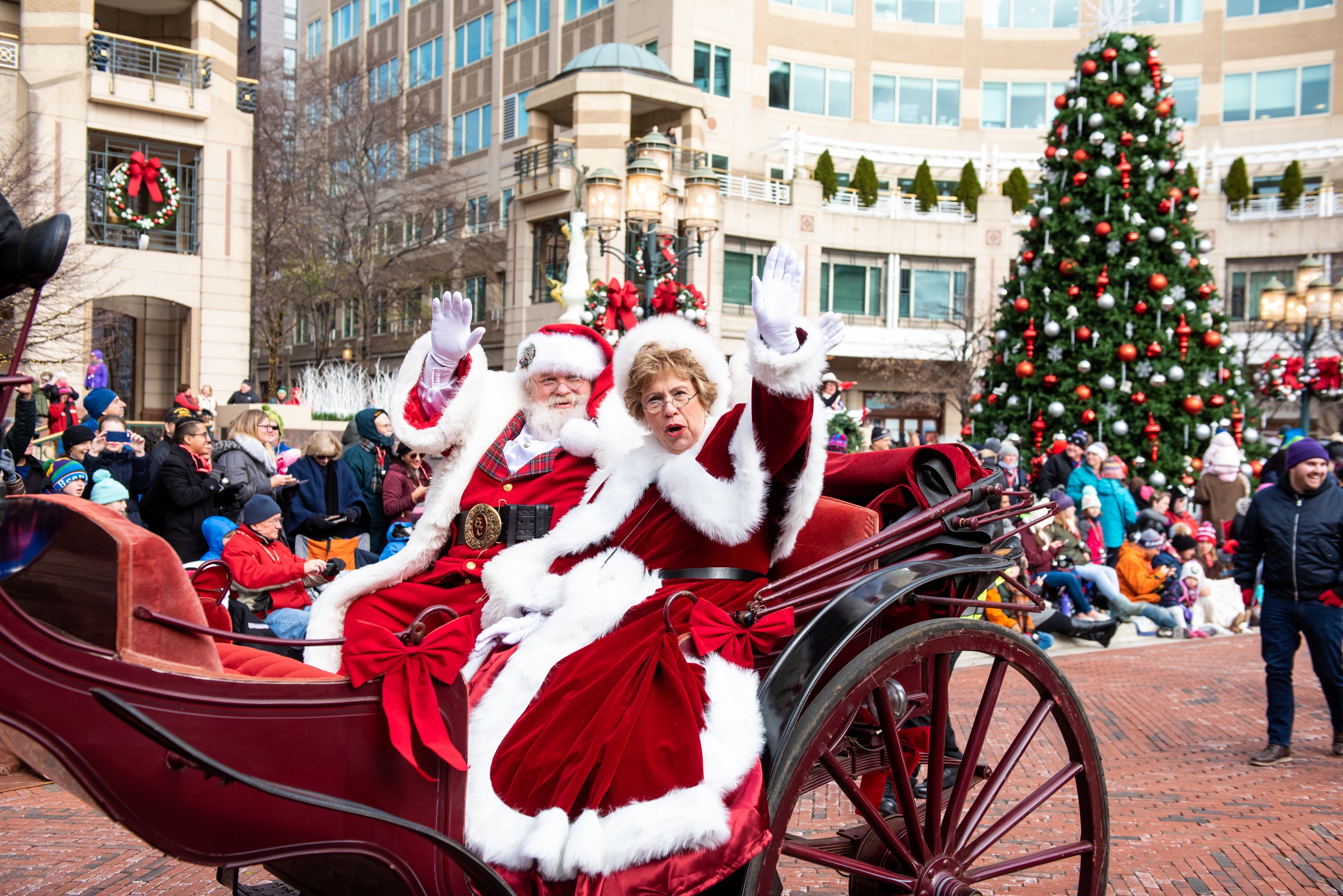 Reston Community Center provided major support for the Reston Holiday Parade as a Community Partner and additional support was provided by balloon sponsor, Reston Town Center Association. This community event is a success also thanks to the assistance of hundreds of volunteers who help with staging, serve as line marshals, handle the huge balloons and more, and all those who take part in the procession of 1,400 participants. This community tradition has grown since 1991 when Reston Town Center presented the first Reston Holiday Parade, which is held annually on the Friday after Thanksgiving.

Nominees for all categories are chosen by a panel of relevant experts which include a combination of editors from USA TODAY; editors from 10Best.com; relevant expert contributors; and sources for both these media and other Gannett properties. The nomination panel for each award category is displayed on its associated contest page. All voting is digital and the 10Best Readers’ Choice Award contest is accessible on the 10Best.com website. While the 10Best Readers’ Choice Award contest lives on 10Best.com – a standalone travel media site – it is promoted across USA TODAY Travel Media Group’s digital and mobile products, as well as via social media. Nominees are also announced and/or promoted across relevant USA TODAY departments, and through Gannett media outlets. 10Best.com provides users with original, unbiased, and experiential travel content of top attractions, things to see and do, and restaurants for top destinations in the U.S. and around the world. The core of the site’s uniqueness is its team of local travel experts: a well-traveled and well-educated group who are not only experts in their fields – and their cities – but discriminating in their tastes. These local experts live in the city they write about so the content is constantly updated. 10Best.com averages 5 million visitors per month. It was acquired by USA TODAY in January of 2013. USA TODAY is owned by Gannett Co., Inc. (NYSE: GCI).