Food is one of the joys of life. What better way to enjoy it than to learn to cook from a professional chef in a bucolic setting like the Glenfiddich Farm Cookery School, nestled amidst the rolling landscapes of Loudoun County.

Run by Chef Olwen Woodier, the cooking school is housed inside her home, a former 1840s dairy. You can still see the rustic elements of its stone walls and exposed beams, along with the large, modern kitchen where Woodier conducts her classes.

Outside the house, it is from Woodier’s extensive cottage gardens, abundant with vegetables, fruits and herbs, which she selects her fresh produce for the menus that accentuate the harvest of each season. She makes it a point to cook organically whenever possible, so freshness is always assured. “About 75% of the meal comes from my garden in the summer,” she said. She also uses three aero gardens for hydroponic farming.

It was quite the treat to gather fresh herbs and tour through the maze of plantings. The beautiful landscaping was accented by flowers, birdhouses, sculptures and a pond to create a refreshing retreat—we barely wanted to go back inside to cook. But, baskets of fresh produce and farm-fresh eggs from her own chickens awaited.

This day, we four ladies were in charge of creating our meal, and chef Olwen put us right to work peeling, chopping, mixing and sautéing. Our recipes included:

We gathered around the expansive island and practiced rolling gnocchi beneath an oversized demonstration mirror. Then, were assigned to cooking stations throughout the kitchen. At once the tantalizing aromas filled the room. When finished cooking, we proudly displayed our feast on a large sideboard before helping ourselves to the delicious contents, a glass of wine, and a few selfies. There is nothing like a shared meal to bond old and new friends. 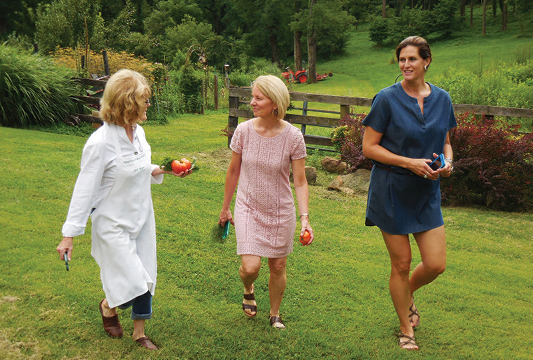 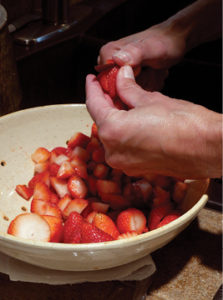 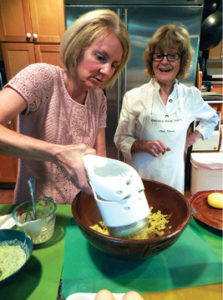 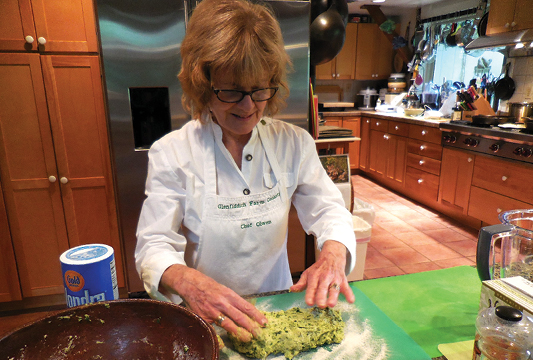 “It is certainly a great learning experience and a healthy way of eating since we use a lot of vegetables. Students have a good time and they learn in a laid-back atmosphere,” Woodier said.

“I don’t just throw the students into it with the recipe; it’s really about teaching. I will stop and demonstrate how to do something or how to use an unfamiliar tool. Some people have never cooked in their lives. And they get quite excited about it. Although, most are pretty good cooks already.”

For the menus, “I pick things I think people will like and that I know how to do very well.” She tests recipes two or three times before offering them in the classes. “I also like to incorporate travel, choosing recipes from counties where I’ve eaten or taken classes.” Each class revolves around a theme, like Italian or Mediterranean, comfort foods or garden bounty. 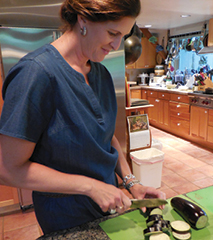 A typical cooking class features five courses: an appetizer, two mains, a side and dessert, and possibly a bread. “This way, everyone in the class gets the chance to work on something.” Students are located at stations around the kitchen. If the group is large, work in teams on a particular recipe, bringing it all together at the end. Special food requirements can also be accommodated.

Open-enrollment classes are scheduled Wednesdays throughout the year, and Woodier often hosts special groups who want to learn to cook, ranging from Osher Lifelong Learning Institute to corporate enrichment sessions to groups of friends. A minimum of eight attendees is preferred. Check the website at www.glenfarmcookery.com for upcoming classes.

Woodier is passionate about good food. She was raised in a large farming family in the north of England where “we had big fields, goats, cows, and a huge garden, where we cooked everything we grew. As a child, I was given little jobs to do, like picking this or stirring that, and we would have these huge harvest festivals and home harvest dinners. It was easy to develop a love of food.” In her 20s, she moved to Geneva and studied at the Culinary Arts Academy Switzerland.

Transferring to America, Woodier accepted a job as a personal assistant to the CEO of a New York publishing house who, when he learned about her cooking background, asked her to cook for the executive office on Fridays. For inspiration, she followed Julia Child. “Julia was my abstract mentor in a way,” she chuckled. (This is what started her on her path to a more formal education. She continues to take cooking classes and camps, both locally and at the Culinary Institute of America (CIA)).

Olwen’s name is Welsh and means “white flowers.” It comes from the legend of Princess Olwen, the fairest princess in Cornwall and daughter of Bran Dhu. It is said that wherever she walked, white flowers grew.

Now married to photographer Richard Busch and mother of a small daughter, Woodier started freelancing for magazines, selling food stories and photography to the New York Times, National Geographic, Family Circle, Gourmet, and many other publications.

She also began writing cookbooks. Her first, the award-winning Apple Cookbook, was published in 1984, followed by Peaches and Other Juicy Fruits, Corn, and several others. Her latest cookbook, featuring Pestos, will publish in early 2018. 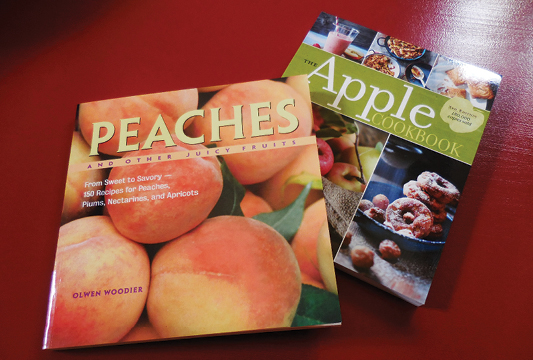 After relocating to Virginia for Busch’s job as an Editor for National Geographic, someone suggested that she might offer cooking classes at local community centers. Instead of taking her courses offsite, she decided to revamp her home into a teaching facility. After major renovations, the cooking school opened in 2005.

It’s nice to be able to share something you’re passionate about. “People come here because they want to learn. But, the rewards for me are also great,” Woodier said. “I like nurturing people and making them happy and get a good feeling from sharing.”

Most of the crockery and serving plates used in the cooking school were created by Woodier’s husband, ceramic artist Richard Busch, whose Glenfiddich Farm Pottery is housed in the lower level of the barn. His pottery is available through various galleries and juried exhibitions, as well as through two studio sales, held June and December,
and the shop.

Pork Tenderloin with Pears and Apples