Pedestrian Bridges to Be Installed Starting at Innovation Station

As spring rolls in, work on Phase 2 of the Silver Line continues to spiral ahead.

“Good weather has continued, and work never stopped during the winter months,” said Charles Stark, vice president and executive director of the project which is being built by the Metropolitan Washington Airports Authority.

Construction of the rail system, including tracks, stations, and supporting infrastructure is more than 56 percent complete and construction of a 90-acre rail yard and maintenance facility on Dulles Airport property is almost 50 percent done, according to Stark.

Major progress has been made on the components of the aerial guideway that will carry trains through Dulles Airport as well as the pace of construction along and above the Dulles Greenway in eastern Loudoun County as the tracks head to the terminus station being built in Ashburn.

According to project and construction manager John Kearney, “the project will see several dramatic changes taking place over the coming months at all five stations now being built in the median of the Dulles Airport access highway and the Dulles Greenway. As the precast erection and concrete placement continues, the structural steel will top off the stations giving each the same signature look of the Silver Line at grade stations that are now familiar in the first phase through Tysons Corner and west to the east side of Reston. Phase 2 runs from the Wiehle-Reston East Station westward to Ashburn through Dulles Airport.

At the airport station, which is along the front of the parking garage opposite the parking bowl from the station terminal, precast girders are now in place on both sides of the Dulles Station and work speeds along on the aerial guideway decks and tracks near that station. 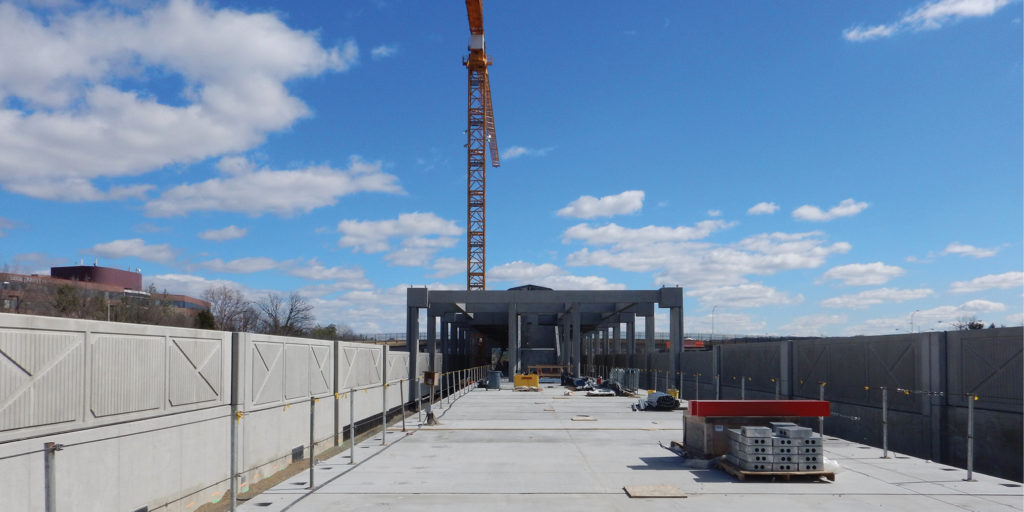 Along the Greenway and median of the Dulles International Airport Access Highway (DIAAH), installation of concrete ties and track will continue and retaining walls continue to stretch from the east to the west to be followed by installation of fencing, Kearney said.

The hand mining work beneath the highway is drawing to a close. This work has attracted lots of attention as crews struggled to dig out utility tunnels, by hand, through extremely dense rock known as diabase (granite) which had proven to be too much of a challenge for traditional tunneling methods. Hand-mining required a lot of “crawling on their knees” for workers charged with these tasks, according to senior project manager Stephen Barna.

Soon, pedestrian bridges to provided access for rail users to and from stations to parking areas and adjacent plazas will begin. This work will require lane closings and some traffic delays. The first of the installations will take place at the Innovation Center Station and will connect that station to the future pavilion on the south side of the Dulles Toll Road and DIAAH.

Here are some highlights of recent work:

In March, the final aerial guideway girders at Dulles International Airport were set in place near Saarinen Circle. The four 84-inch tall precast concrete girders measure nearly 140 feet long, weigh approximately 95 tons each, and will support the Silver Line Metrorail trains that will run through the airport.

Once complete, the guideway will be more than three miles long and connect the east segment of the Silver Line Phase 2 in the median of the DIAAH with the west segment that will run in the median of the Dulles Greenway. Also, overnight detours along the Greenway allowed project crews to construct a large concrete span for the Silver Line aerial guideway over the eastbound lanes.

Pictured at top: Capital Rail Constructors’ cranes continue to work on this Silver Line station in the median of the Dulles Airport Access Highway/Toll Road corridor near Reston Town Center. The station is one of six being built in the second phase of the Dulles Corridor Rail Project which is being constructed by the Metropolitan Washington Airports Authority. (Photo by Leslie Pereira, Capital Rail Constructors.)