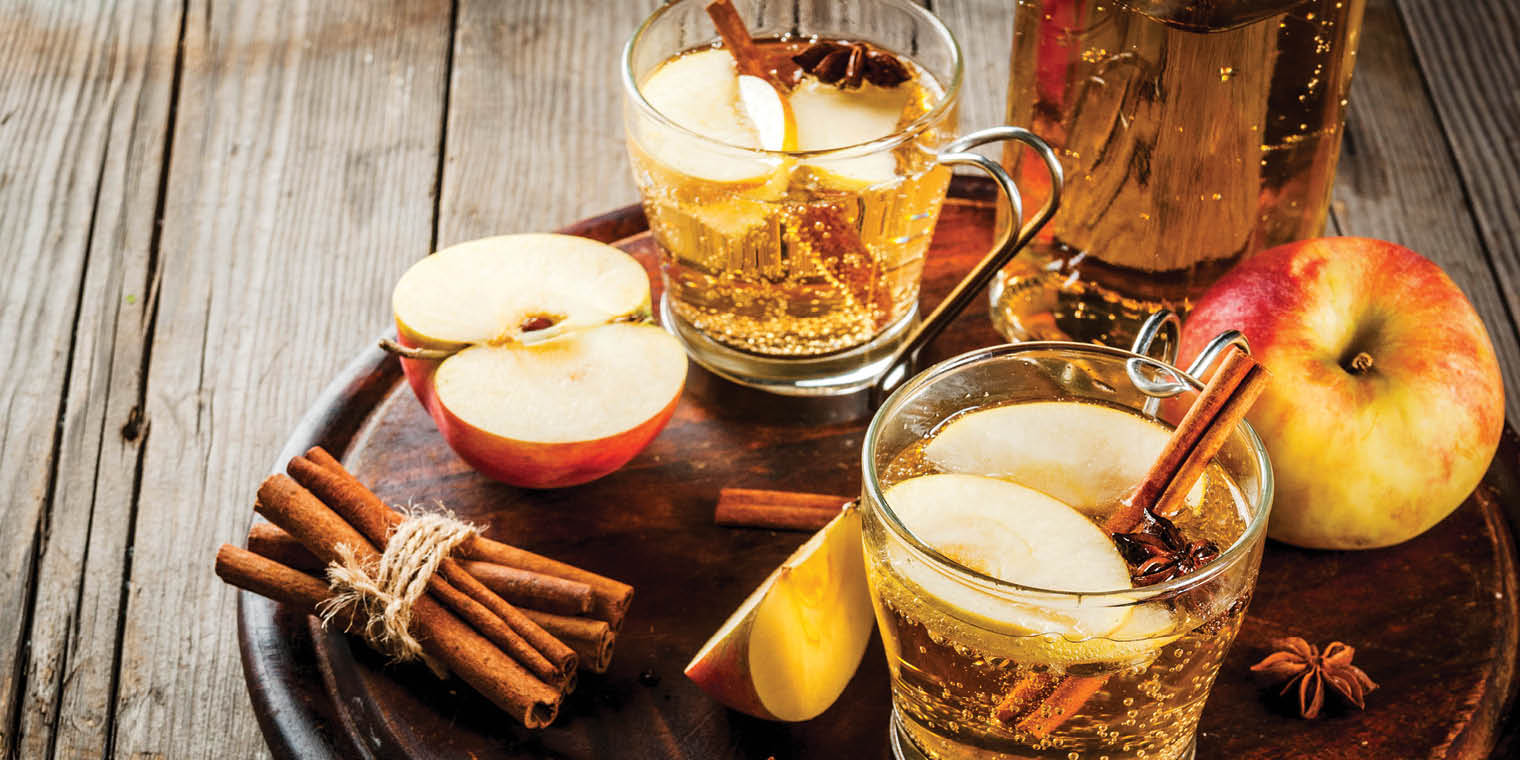 A Toast To Cider

Virginia Cider is an Ideal Complement to Any Holiday Celebration

During the holiday season, many people begin to contemplate which wine or champagne they are going to serve for holiday meals and celebrations. As an alternative, why not consider one of Virginia’s fine ciders? It can be as dry as wine, slightly bubbly like champagne and as refreshing as beer. Virginia cider offers a charming way to celebrate with style. Like wine, cider styles range from dry to sweet, still to sparkling, simple to complex. It pairs well with foods or can be enjoyed simply by itself.

“Cider is equally as food friendly and beautiful as wine when paired with the right food, and can make the whole experience better,” said Sarah Showalter, co-owner of Old Hill Cider. “And there are so many options for cider, depending on what you’re serving.”

She recommends her Farmhand cider with its full body and tannins to pair with poultry, and her Yesteryear cider, a bright and sharp cider, with maple-glazed ham or salmon. End the meal with their Season’s Finish, an ice-style dessert cider that pairs ideally with desserts, cheeses and dried fruits.

Showalter’s is one of the few cideries with its own orchards and farmstand market where people can purchase apples. Some apples are specific to cider making, while others, like the heritage apples Old Virginia Winesap, Jonathan, Stayman, Albemarle Pippin and Black Twig serve as dual purpose: eating or cider. A new variety of dessert apple is GoldRush.

Once the daily drink in early Colonial America, cider was popular with people like George Washington, John Adams and Thomas Jefferson. Jefferson created a champagne-like cider made with Hewe’s Crab apples that was his “table drink,” and throughout the 19th century, cidermaking took place in every community.

“Cider was the beverage of choice in Virginia for many years before wine or beer, during a time when water was considered unhealthy. And since the first Thanksgiving celebration was held here in Virginia, why not bring the cider back to Thanksgiving as an alternative to wine?” said Courtney Mailer, owner of Blue Bee Cider, Virginia’s first urban cidery.

Sadly, throughout our history, with the Industrial Revolution and the changing tastes of the growing immigrant population, cider fell out of favor and beer became a more popular drink of choice. Prohibition dealt another blow to the cidermaking industry.

Cider is making a comeback here in the United States, however. Today, Virginia is the 6th largest apple-producing state by acreage and is enjoying a renaissance of artisanal hard ciders as evidenced by the growing number of cideries and the availability of ciders in restaurants and bottle shops.

Blue Bee Cider has been planting its own orchard to help bring back from extinction the prized Colonial-era heritage apple varieties used for their own ciders. They have the largest orchard producing Harrison apples in the world.

“Cider apples are different from table apples, just as wine grapes are different from table grapes,” so you can select a cider to match any cuisine, Mailer explained. For traditional Virginia fare and salty hams, she recommends her Charred Ordinary cider, and for poultry, the Mill Race Bramble, with its berry notes. For December holidays, enjoy the Firecracker, a dessert cider made with apple brandy from Catoctin Creek Distillery that is rather like an apple Port-style wine. And for a nice (and less expensive) alternative to champagne, try the Aragon 1904.

The Virginia Tourism Corporation describes cider as “fermented apple juice just as wine is fermented grape juice. The best cider, like the best wine, is carefully crafted from fruit chosen for cider making.”

Cider involves no grain and it is not cooked; it is pressed from apples specifically selected for their tannin, acid and sugar levels.

The term “cider” is considered “hard cider.” However, it has a lower alcohol content than wine due to the lower sugar level in apples as compared to grapes. You may see cider in the refrigerated section at your grocery store, but that is merely unfiltered apple juice with no alcohol content. Outside the United States, the word “cider” refers exclusively to alcoholic drinks.

Cider pairs particularly well with many foods, often better than wine. A dry cider with heavier tannins can substitute for a red wine and pair with meat dishes. A crisp cider with a higher acid level works well with rich, buttery dishes. Off-dry cider goes with smoke and spices, and works well with grilled vegetables. Sweet cider pairs brilliantly with vinegary or spicy foods like barbeque or Thai. Dessert ciders go with anything.

This holiday season, why not include several of Virginia’s fine ciders with your celebrations? You just might make a new tradition of your own.

In September 2012, Virginia’s Governor Bob McDonnell established a week dedicated to hard cider in order to both celebrate the tradition of crafting hard cider in Virginia and raising awareness about its popularity throughout the Commonwealth. Virginia was the first state to do so. The week-long celebration, November 9-18, 2018, features special tastings, pairings, dinners, events and workshops, including the Alexandria Cider Festival held at the Lloyd House in Old Town on Saturday, November 17th. Learn more at www.ciderweekva.com.