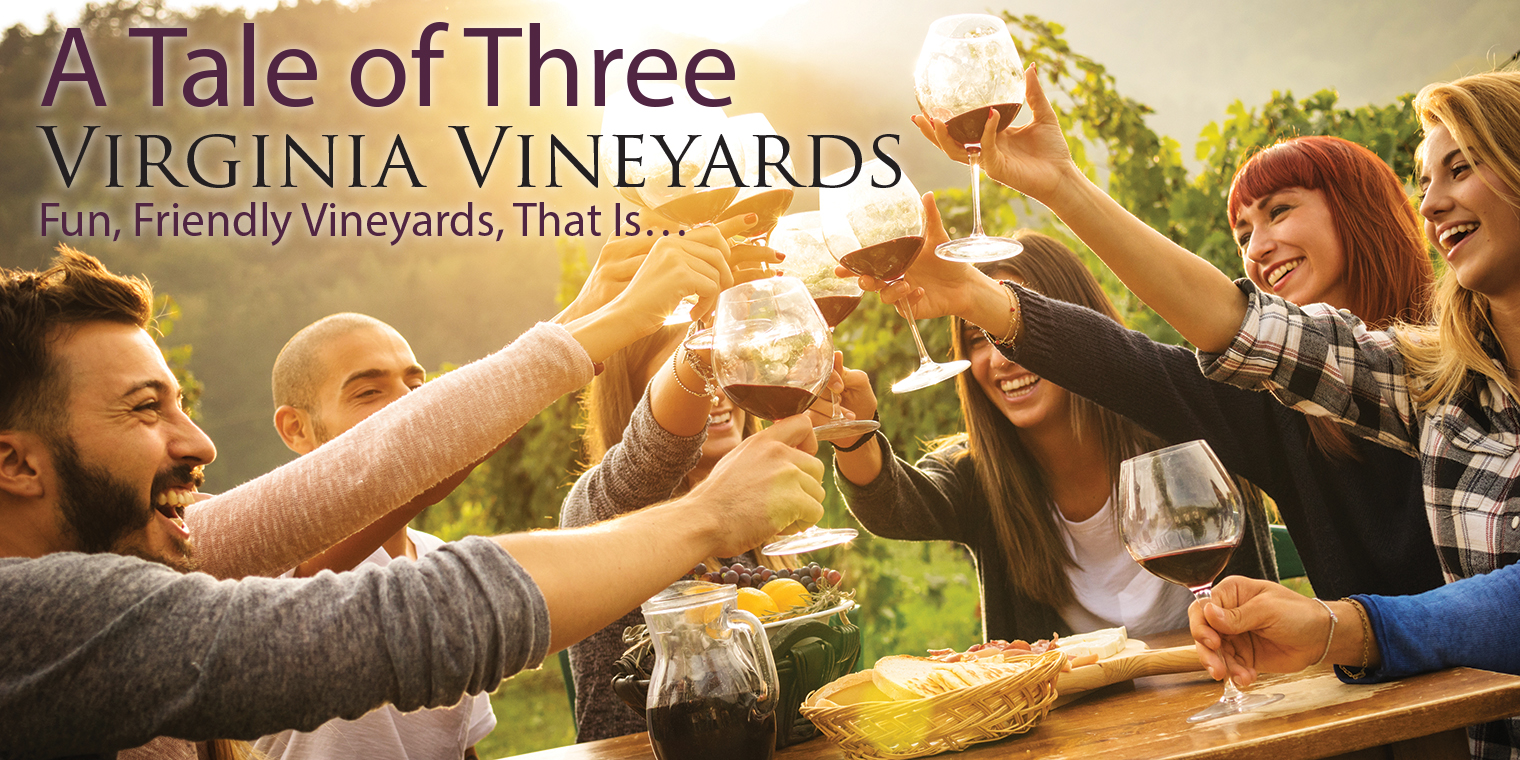 A Tale of Three Virginia Vineyards

A Tale of Three Virginia Vineyards 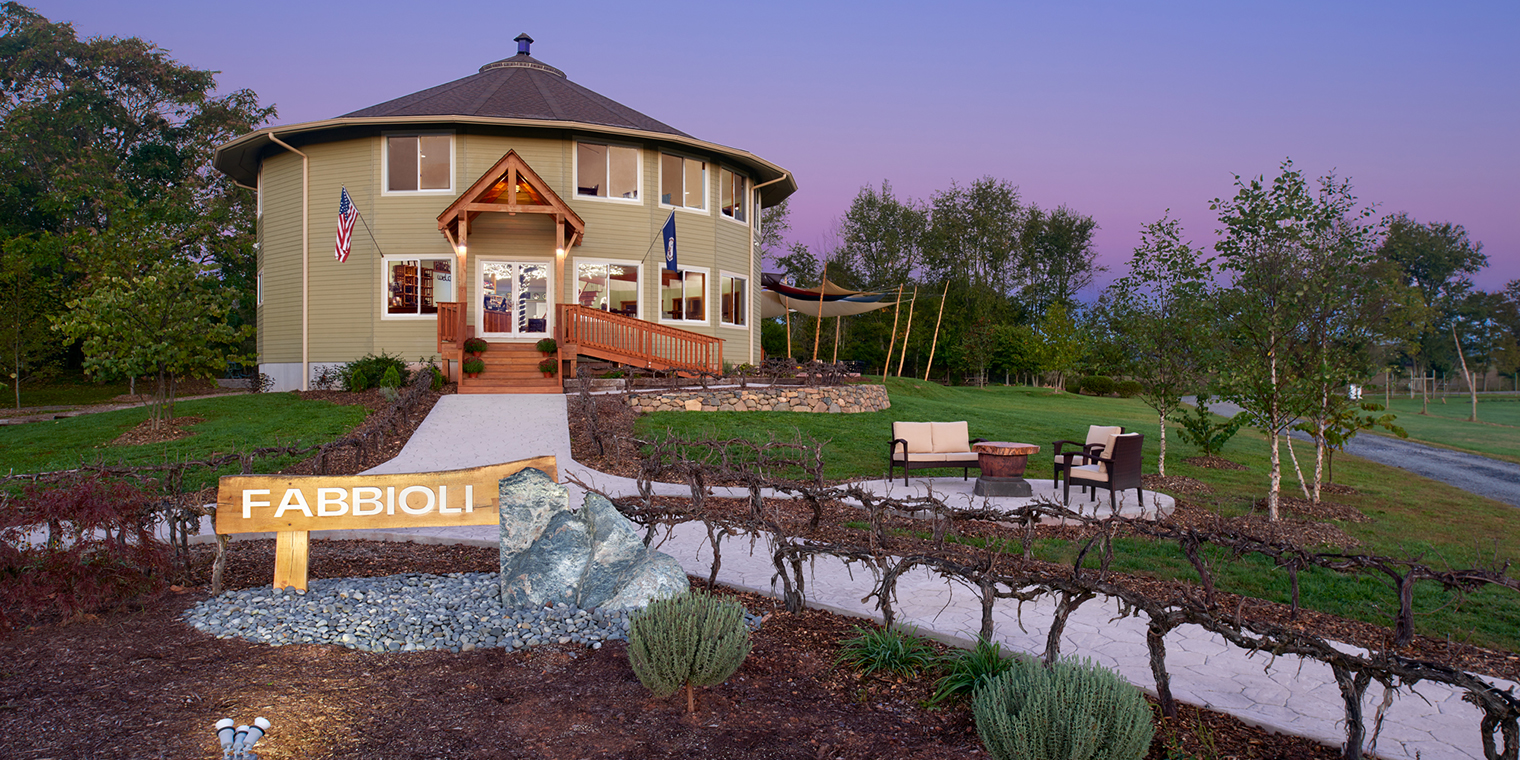 The ever-meandering wine trail through the Northern Virginia wine region just keeps on growing. Just as the ripe wine grapes cluster on the vines, Loudoun’s wineries have been grouped into six distinct wine clusters. Just take 7 to Leesburg and head north on 15 through the fertile, rolling countryside of the Potomac Cluster, and you’ll reach Fabbioli Cellars, described as ‘real people, Earth-friendly, fabulous wines.’ Doug Fabbioli started out his vicarious viticultural journey back in the eighties working in a vineyard in upstate New York, honing his experience for a decade beside legendary vintners in California’s Sonoma Valley as Barrel Oenologist at Buena Vista, before his introduction to the then-fledgling Virginia wine scene at Tarara Winery on 475 sprawling acres in the foothills of the Catoctin Mountains. Following a stint at Windham Winery, (now Doukénie) where we first crossed paths long ago, it was destined that Doug would finally open Fabbioli Cellars.

Doug Fabbioli has lent his considerable expertise to many an emerging Virginia winery, including Bluemont, Notaviva, Hiddencroft, 8 Chains North, North Gate (which you might also find at the Falls Church Farmers’ Market),  and Catoctin Creek, all of which he helped get started. His philosophy is a spirit of working together, “and then everything else is great. All boats lift in a rising tide,” he says.

“The goal is to create economic value, a job you love, be a steward of the land, and do it for generations.” At Fabbioli Cellars, many sustainable agricultural practices have been implemented following this sincere respect for the environment. Known primarily for their reds, Fabbioli Cellars offers a smooth, drinkable Chambourcin in the style of Chianti or Montepulciano, with bright red berry fruit – great to chill with on the deck. The 2013 Cabernet Franc Reserve, a smoky, spicy classic, garnered the Chairman’s Grand Award at the 2016 Loudoun County Wine Awards; the 2013 Tre Sorelle, a Bordeaux blend of three sister varietals of Merlot, Cabernet Sauvignon, and Petit Verdot, picked up the Gold Medal; and Doug was most deservedly recognized with the auspicious title of Wine Maker of the Year.

An award-winning vintner with over 30 years of winemaking experience, Doug Fabbioli considers it a great honor to be poured at top-notch restaurants such as Harriman’s Virginia Piedmont Grill at the Salamander Resort & Spa, the Red Fox Inn in Middleburg, and The Wine Kitchen in Leesburg. At Fabbioli Cellars, there is a great appreciation for their network of friends, employees, and volunteers, who are considered extended family. Located only 27 miles from Tysons Corner, with great wines, picnic tables, fire pits, and a warm welcome, all in a bucolic setting, Fabbioli Cellars is, indeed, fabulous

Enjoy an early spring getaway to Gadino Cellars in the quiet and beautiful countryside of Rappahannock County. Relax in the rustic Tuscan-inspired tasting room ($8 per tasting including logo glass) or under the pergola on the sun-splashed deck overlooking the gardens, the vineyards, and the Blue Ridge Mountains. The spectacular Skyline Drive is just around the corner.

The Italian grandfathers of Bill and Aleta Saccuta Gadino brought their skill and passion for wine-making to family and neighbors when they emigrated from Italy in the early 1900s. A family-run winery, Gadino Cellars invites you to come be part of ‘La Famiglia.’ In fact, you can join the Gadino Cellars PMI Club and become a ‘Persona Molto Importante’ or ‘Very Important Person.’

Wines of note produced by this proud certified Virginia Green Winery include the 2015 Barrel Select Chardonnay, the 2014 Petite Manseng, and the 2014 Delfino Rosso, a Bordeaux blend of Cabernet Franc, Cab Sauvignon and Petit Verdot with flavors of black berry, currant and structured tannins that complete this Meritage-like portrait. I also enjoyed the 2014 Petit Verdot and a crisp, clean citrus oriented Single Vineyard Pinot Grigio from their estate vineyard.

Bring along a picnic (or select from gourmet cheeses and local sausage) and spend the day on the deck or challenge friends to a game of bocce on the regulation courts. Benvenuti tutti! 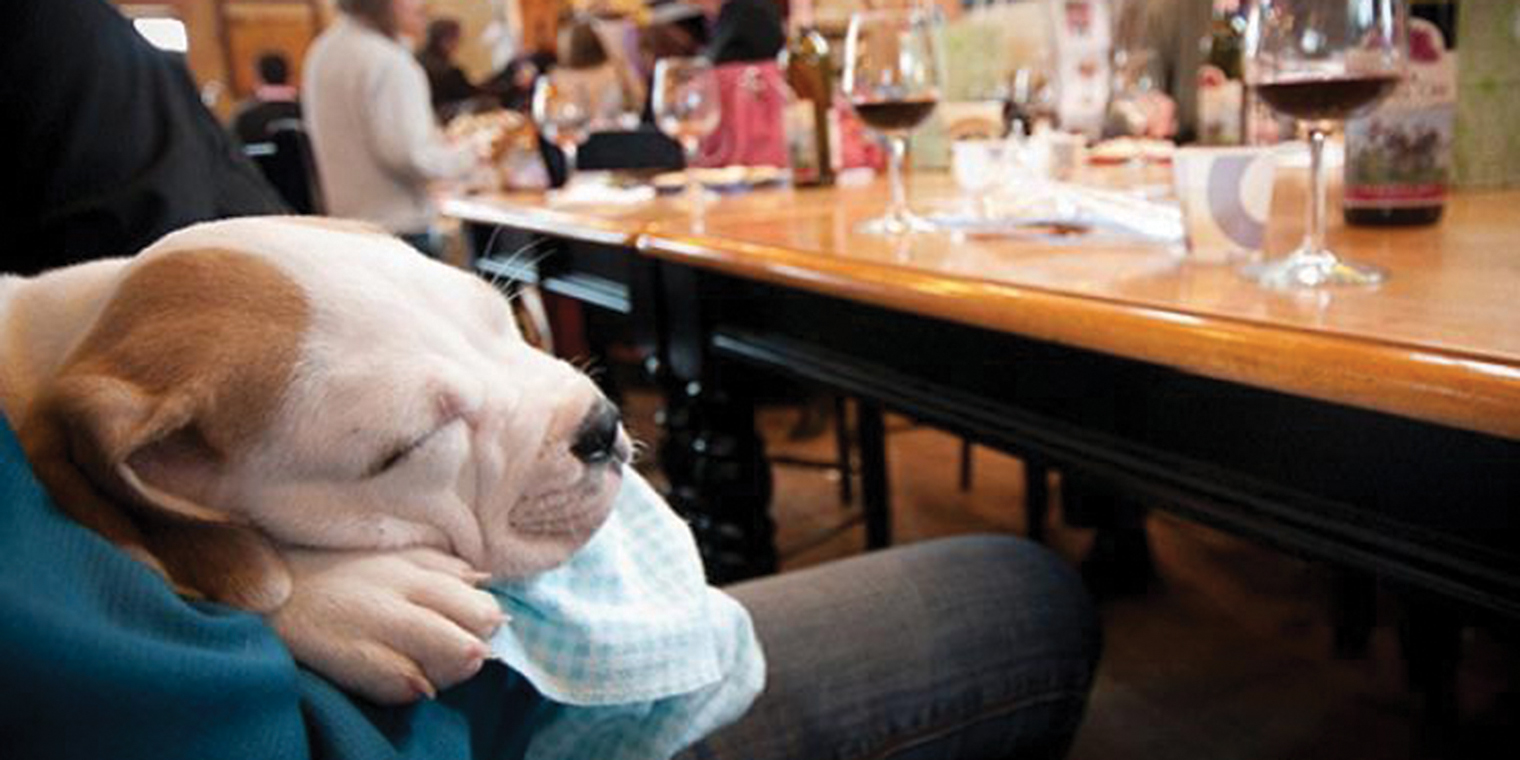 When they coined the phrase “a stranger is just a friend you’ve never met,” they must’ve been referring to Brian and Sharon Roeder of Barrel Oak Winery just outside the charming town of Marshall in Fauquier County. These two possess an innate sense of kindness, as reflected by the respect and friendliness they offer everyone who crosses their threshold, as well as their unwavering energy and passion for charitable works. Brian holds court by the fire, never missing a greeting, as guests enter his benevolent realm like long-lost old friends. With regular charitable events on the property, it’s easy to get involved too. This is “a place of community” where “friendships are being made.” Guests return again and again.

And then, of course – the dogs, the theme of the whole place. They have two dogs, a golden retriever and an American bulldog from the Lost Doggie/Cat Rescue Foundation, which they also support. They even have a Doggie Yappy Hour!

With regular live music, you get the feeling you’re welcome to hang out all day, until 9 pm on Fridays all year long, and until 9 pm on Saturdays in the summertime and fall. Sharon and Brian designed and built this beautiful architectural space of site-blasted bluestone and granite with reclaimed Douglas fir on the bar.

Barrel Oak Winery is built upon 170 acres of horses, alpaca, and black Angus grazing in the countryside across from Little Cobbler Mountain just off I-66, with 30 acres planted with a “scientific and artistic” approach to winemaking, producing 10,000 cases a year. Their best-selling wine is the “light, fruity sunshine in a glass” BOWhaus White. Don’t miss the Chocolate Lab dessert wine, a Port-style Chambourcin infused with cocoa nibs. I selected a Late Harvest Vidal Blanc to go called “Goldie” (as in Golden Retriever), a honeyed nectar with tropical aromas, in anticipation of this summer’s fresh peaches at the Falls Church farmers’ market.

With this impeccably honed formula— a dog-friendly, pastoral setting 42 miles from Tysons, green building and geothermal heating/cooling, bring-your-own picnic inside or out, build-your-own fire pit, evening hours on weekends, BOWClub parties from June to September, charitable works, genuine warmth and camaraderie, chill music, and great wine – they have created a vintage all their own. And although harder than expected, Brian at one point admitted, “We might pull this off.” Well, they certainly did. So place your bets and hold on, because this horse is taking off, and fast. And the nice thing is—you’re invited along for the ride.v