Your Passage to India

You don’t need to circle the globe to sample authentic Indian cuisine, just make a reservation at the 1947 Indian Restaurant. The first Indian restaurant in Loudoun is definitely a sight to behold, and a terrific place to experience what makes Indian food so captivating.

Asad Sheikh, owner of Curry Mantra and London Curry House, opened his new Indian restaurant with the goal of bringing originality to the Northern Virginia dining scene. Sheikh hails from a long lineage of successful restaurant owners, dating back to his great-grandparents in Mumbai. He selected this location in the Potomac View Shopping Center in Sterling “because there aren’t any Indian restaurants in fast-growing Loudoun County yet.”

Rather than sticking to one region of Indian food as many restaurants in the Washington, DC area do, Sheikh contacted a renowned chef known for her expertise in all regions of Indian cooking. Malgudi Kavitha is one of India’s most popular celebrity chefs. Sheikh compares her to Gordon Ramsey, but her energy brings to mind Giada de Laurentiis.

When Sheikh met Kavitha in India, he implored her to come to Northern Virginia to create the recipes he would feature at 1947 Indian Restaurant. With television shows, restaurants, cooking classes, cookbooks, and food festivals, Kavitha is a showstopper. She holds the Guinness World Record for the longest non-stop solo-cooking marathon. She set the record in 2012 by cooking 1,550 vegetarian and non-vegetarian dishes in 35 hours 20 minutes before a guest audience. Born and raised in southern India, the chef learned to cook different regional dishes by working in at numerous hotels. Today, she focuses on introducing traditional Southern Indian cuisine to diners, specifically Kerela, Karnataka, Andhra, and Chettinadu. 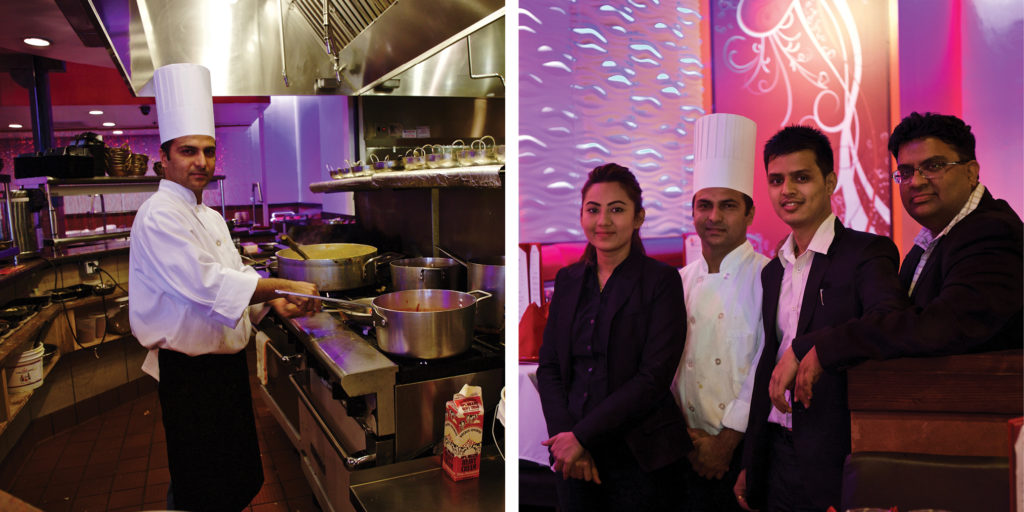 Kavitha graciously agreed to share her recipes with Sheikh and help his staff create a unique menu for 1947 Indian Restaurant. She worked in the new restaurant’s kitchen one month before and one month after opening. Tutoring 1947 Indian Restaurant chef Basu Pandey in the mixing of spices, Pandey says he learned a lot about India’s regional cooking styles. “The spices she uses are a bit hotter than what I normally make,” he explains. “She taught me to mix our own Masalas (spice blends)—we dry the red chilis in the sun here, and then grind the chilies and coriander in house.”

Pandey is from Nepal and studied in a culinary program after watching his mother cook at home. The chef has perfected his preparation of 1947 Indian Restaurant’s Hyerabad Biryani dish. Using three types of rice and chunks of curried goat, it’s a colorful, aromatic mix of textures and flavors. Pandey also makes Indian street food—specifically Bombay Vada Pav, a spicy potato fritter with cilantro and chutney on a soft roll. “This is a popular snack in Bombay,” notes Sheikh. Despite being a regular at Indian restaurants in the area, I’ve never seen this portable food on another menu.

Regional Specialties are the Standouts at 1947 Indian Restaurant

India’s specialties are listed by state names: Bombay, New Delhi, Jaipur, Punjab, etc. “We have customers who only come for this special or this dish,” says Sheikh. The owner explains that India’s regions vary their heat levels depending on the local weather. “Bombay’s tropical weather, Punjab’s cold snows—the spices make a difference. The South is spicy, and the North is heavy, creamy food like lentils and butter chicken,” explains Sheikh. “Chef Kavitha worked really hard to make it exactly the way it’s made back home.” The lunch buffet stretches more than ten feet containing many of the restaurant’s signature dishes. It’s a great way to sample the breadth of the menu here and discover some new favorites. Vegetarians will be especially pleased with the Vegetable Jalfrezi, cooked in a tangy tomato gravy, and Spicy Vindaloo, potatoes blistered in red chilis, onions, and vinegar. The Hara-daniya, a cilantro- and mint-based curry is so potent and fizzy you’ll want to scoop it up with thick slices of Naan, Roti, and Onion Kulcha. Though it’s tempting to fill up on savory rounds of Aloo Paratha and Paneer Kulcha breads, save room for the feature dishes. My guests relished the velvety Butter Chicken, and I was enamored with Jaipur Lal Maas, tender-to-the-bone lamb cooked with dry red chilies, black pepper, coriander and cumin seeds. The grilled Tandoori Chicken or Britain’s beloved Chicken Tikka Masala is a good choice for those seeking a gentle introduction to Indian cuisine.

Featuring the Culture and History of India

The décor of 1947 Indian Restaurant is also notable. The Maharajah-inspired red and orange colors are meant to create an atmosphere as unusual as the multi-regional Indian cuisine. The darkish lighting with a glittering glass tiles create a silhouette of the Taj Mahal.  “With the décor, I wanted vibrating colors, and to educate Americans about India. Not just about the food, but about the complete experience,” states Sheikh. On the walls are images of Bollywood, Ghandi, and map of India. Signage notes that India is a country with 1,600 dialects and shows a timeline of Indian history. “The Mughal Empire, British Raj, and landmarks of India like the Royal Palace of Mysore. Even Bengal Tigers,” says Sheikh. “America won’t see this in any other restaurant.”

The restaurant hosts live music on weekend evenings performed by classical Indian violinist Ustad Dlishad. 1947 Indian Restaurant has the capacity for 225 seats and can accommodate groups. The restaurant is growing busier as more locals learn about it over social media and word-of-mouth. Because 90% of his customers are Americans, Sheikh is determined to teach them about his culture while serving unique Indian food. He knew Kavitha’s recipes would offer his customers something they can’t find anywhere else in the DC area. Sheikh smiles, nods his head and adds, “she is a true genius.”