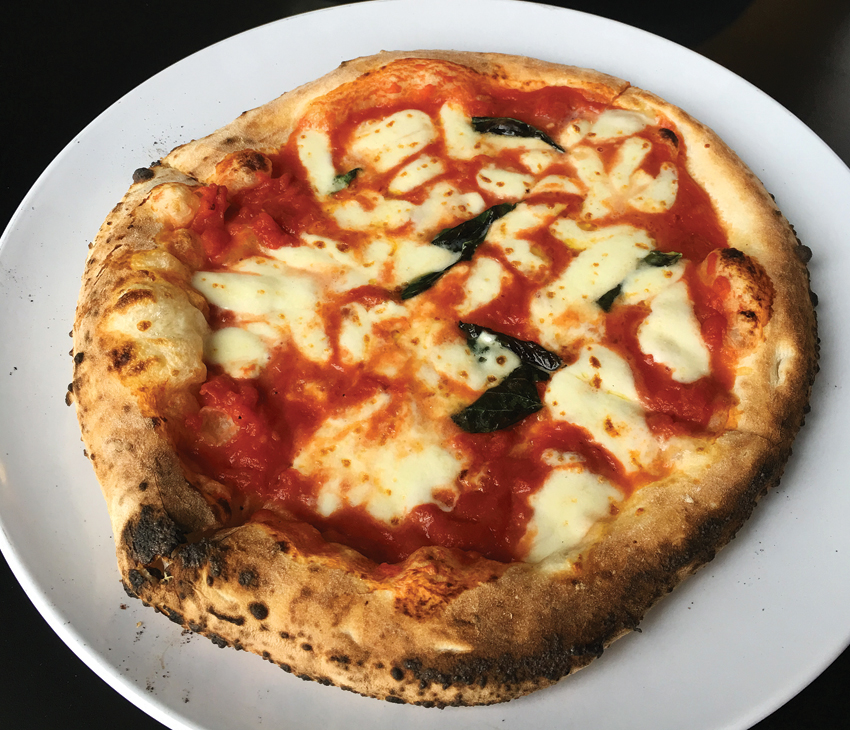 Tonino Topolino is the head chef at Crust, the new brick oven pizzeria in Tysons. His last name means baby mouse in Italian, and I’m told his friends call him “Mickey Mouse.” Chef Topolino doesn’t have big ears, rather he is a sinewy, energetic young man who moves and speaks quickly. He eagerly stops to talk when the topic is his passion for cooking. You can almost imagine La Nozze di Figaro playing in his head as he rhythmically smoothes and flattens a ball of dough or splashes a circle of red sauce.

Topolino explains that he obtained most of his recipes from his grandmother in Italy (as many Italians do—myself included), and strives to recreate her distinct red sauce—the orangey-cream blend she developed for her cannoli—and the tangy aged balsamic and olive oil dressing on the Brushetta Classica. Topolino also considers presentation an important part of the dining experience, so every plate he serves is simple and beautiful. His grandmother would expect nothing less.

Crust has been certified by the Associaziane Verace PIZZA Napoletano (VPN), which means every pizza must be made with ingredients imported from Italy and cooked using techniques established by the VPN. The Naples Chamber of Commerce established the VPN in ‘the old country’ back in 1984 to protect and increase the value of pizzas produced and processed according to Neopolitan traditions and customs. Topolino follows VPN requirements exactly in the production of his pizzas at Crust.

In the back corner of the restaurant, you’ll see an enormous brick oven containing a blazing wood fire, an essential element in the VPN baking process. This handmade, red-tiled oven with “CRUST” emblazoned on the front is the centerpiece of the restaurant and has been signed by the artisans who built it. Shipped here from Italy, the oven is designed to reach temperatures of more than 1000 degrees and can cook a pizza in less than two minutes. The result is a perfect crust that is simultaneously crisp, soft, airy and charred, exactly as you would hope to find in Naples. But the good news is you can have that same extraordinary pizza right here in Tysons.

So, it’s pretty obvious that you should order a pizza, of course, but do save some room for an appetizer and dessert. Perhaps begin your meal with the wispy Bruschetta Classico—creamy, pearl-like mozzarella on a bed of tart cherry tomatoes, lightly bathed in Jewel of Tuscany olive oil and balsamic vinegar. Another standout is the Arancino Zafferano Con Ragu, fried risotto balls, flavored with a dollop of beef ragu, fontina cheese and a smidgen of green peas. These saffron-colored peaks emerge from the tomato puree like golden mountains in a red sea.

A pizzeria is often measured by its Margharita Classica, a purist version of the Neopolitan style. At Crust, Topolino creates a sublime rendering of this traditional tomato sauce and fresh mozzarella pizza with a perfectly charred crust. Other signature dishes include Chef Topolino’s Pizza alla Crust which consists of half a pizza, half a calzone and a small arugula side. Although you can order Crust pizza with or without red sauce, I think it would be a shame to remove this magnificent blend of tomatoes and spices. Sandwich lovers will enjoy the panuozzos, where the same airy crust is folded over and baked with ingredients like prosciutto, ricotta, salami, artichokes and fontina cheese.

Desserts are frequently ignored in a restaurant where pizza is the star, but Topolino doesn’t skimp on his final course. He puts together a petite bowl of irresistible tiramisu, Italian gelati, and freshly prepared cannoli—a Sicilian-style pastry tube with creamy ricotta filling and chocolate chips inside. All arrive at the table accompanied by fresh fruit and a dusting of powdered sugar. Crust also offers seven popular Italian wines by the glass, a choice of twelve wines by the bottle, and Italian coffee service.

DC entrepreneurs Fred Bazzaz and Bobby Sabet are hands-on owners who maintain a briskly paced food service and oversee the business side. This allows their maestro, Topolino, to focus on his kitchen. The team is completely dedicated to upholding their VPN designation and strives for authenticity. The restaurant even has on display Crust’s featured ingredients—the Polselli 00 flour and cans of the whole peeled Carmelina San Marzano tomatoes—both from the Campania region of Italy, should you have any doubt.

What makes Crust especially nice is, after only two months, it feels like it’s becoming a neighborhood gathering place despite being surrounded by urban high-rise buildings. Located in a less developed area on Old Courthouse Road off Route 123, the restaurant offers the added benefit of easy parking. Currently, Crust is comfortably busy, though quiet and quick enough to enjoy relaxed conversation without waiting interminably. They are doing a brisk take out business, but be assured, the best way to eat Neapolitan pizza is steaming hot from its brick oven. More modern than cozy, I believe when more locals discover this little gem they will make stopping for Crust pizza a regular part of their week. I know I will.