Birth of The Reston Chorale

Hints of the town’s love of music were evident at the twilight dedication of Lake Anne Center in December 1965 when the International Folk Dance Group of Washington D.C. entertained the attendees with music and dance.   Walle Hargreaves, a Hickory Cluster resident and folk dance member, was thrilled to be able to show some dance steps to Reston developer and founder Robert E. Simon.

Bob Simon established The Reston Foundation to provide seed money for organizations or businesses that the residents needed and were willing to support.   A lifelong pianist and choral musician, Bob made sure The Reston Foundation presented a series of summer concerts and dances on Lake Anne Plaza in 1966.  With its population nearing 500, a group of the residents began organizing musical events themselves through a non-profit corporation they called Serendipity, Inc.   Offerings in 1966 included a jazz concert at the golf club on North Shore Drive and a performance by the Obernkirchen Children’s Choir at Lake Anne Hall.

By mid-summer 1966 the first and future conductor of The Reston Chorale, Dr. James Christian Pfohl, had moved into Heron House on Lake Anne Plaza.   He must have hoped, as sights and sounds of Reston residents singing and dancing on the plaza drifted through his window, that these residents would be the ones to help him establish several musical groups that fall.

Early in 1966 Bob Simon had invited Dr. Pfohl to establish a Music Center in the new town of Reston.   Simon, who served as president of Carnegie Hall from 1935 to 1960, would have known Dr. Pfohl personally since Pfohl conducted at Carnegie Hall often and in 1964 had been chosen by the National Association for American Composers and Conductors to present their Thirtieth Anniversary Concert at Carnegie Hall.  Earlier in his career Dr. Pfohl had founded five major musical organizations including the Brevard Music Center in North Carolina which he directed for 28 years.  During his time at Brevard, he served as primary conductor for the Charlotte Opera Association and the symphony orchestras in Charlotte and Jacksonville.

As planned by Simon, the Reston Music Center was to include a chorale, chamber orchestra, a summer camp for young musicians and, eventually, a year round professional school for the performing arts. 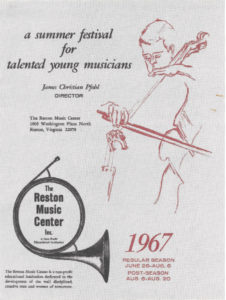 Dr. Pfohl accepted Simon’s invitation and spent the summer months working with Simon on programs for the Reston Music Center’s 1966-1967 season.   Their first task was to immediately establish The Reston Chorale which would need a chamber orchestra to accompany the voices. Their second task was an ambitious one—establishing a 6-week summer music camp for choral and instrumental training for high school musicians.  In addition, because of parents’ requests, Dr. Pfohl immediately established The Reston Children Choir for children in grades 3 to 6, taught by Marion Dillard.

To find singers for The Reston Chorale, Dr. Pfohl placed an invitation in the October 1, 1966 issue of The Reston Times, asking persons interested in singing to meet with him on October 4 at the Lake Anne Community Center.   Of the more than 60 attendees, 40 singers joined the Reston Chorale that evening.  One of the tenors was Bob Hanlon, who had recently arrived from the New York/New Jersey area where his choral work with the David Randolph’s Masterwork Chorus of New Jersey found him singing the Messiah each December at Carnegie Music Hall.  Bob was elected by the members to serve as president; membership dues were set at $5; and rehearsals began the next week at the nursery school above the Safeway in Lake Anne Center.   Henry Pfohl, a voice teacher in New York City and Dr. Pfohl’s cousin, visited Reston several times a month to assist Pfohl with the chorale’s Christmas and spring performances and to provide voice training for chorale members.

The Reston Chorale’s first concert was called “Christmas in a New Town.”   An indoor performance was presented at Lake Anne Hall on December 11, followed by an outdoor televised performance on December 21, 1966.   WETA-TV (Channel 26) chose to broadcast the performance on Christmas Eve while the National Education Television network made the performance available nationwide until the end of the holiday season.

At the time of the Christmas concert, Reston had fewer than 1,000 residents but many helped with the construction of a conical platform that backed up to Lake Anne.  It was covered with greenery and the chorale singers appeared on it as a singing Christmas tree, with the Reston Children’s Choir forming the tree’s base.   The Bram Smith brass repertory ensemble of Washington and musicians from the local high school also participated in the concert.

Even though chorale members had no formal concerts during summer of 1967, many chorale members participated in the choral concerts that were part of the Reston Music Center Camp recitals from June 25 to August 21, 1967.   The camp, with its 160 students and 30 instructors, had a minimum of six concerts each week, which included:  the camp’s wind ensemble every Sunday evening; guest symphony orchestras on Sunday afternoons; the Reston Music Center symphony orchestra on Saturday evening; the camp’s youth orchestra and student recitals on Saturday afternoon; choral and wind ensembles on Friday; and chamber music on Wednesday.  In addition, a pops concert was presented on July 4 and a Vittorio Giannini memorial concert was performed on July 15.

Even though Simon was to leave Reston before the chorale’s 1967 Christmas concert, there are no historical records that suggest The Reston Chorale would not continue to flourish.  Gulf Reston had already met with a group of Reston residents formed to evaluate the survival of existing institutions and Gulf agreed to offer some support in 1968 for the continued operation of the Reston Music Center, specifically the Music Center camp and The Reston Chorale.

The Reston Music Center did continue in 1968 and 1969, but not as a camp.   Reston families provided housing and meals for students; schools, churches, community rooms, and Lake Anne plaza provided places for practices and performances.

By the summer of 1970, the Reston Music Center camp ceased to be and the Virginia Youth Orchestra of Reston emerged.   Dr. Pfohl worked with this group for 3 years and then resigned.  He also resigned as director of The Reston Chorale.  Leaving Reston five years after Bob Simon, Dr. Pfohl said: “I have provided the structure for the continuation of live classical and contemporary music in Reston and for the summer education of high school musicians.” (The Reston Times: January 25, 1973)

The unbelievable amount of music generated by The Reston Chorale from Christmas 1966 to Christmas 1967, The Reston Music Center camp and the endless number of guest musicians and symphony orchestras that Dr. Pfohl persuaded to visit Reston, were a rare gift to those who lived in the new town.   In the 50 years that have passed, The Reston Chorale continues to thrive as it commissions original works and provides concerts that represent the best music of a new town.

AUTHOR: Researched and written by Dr. Harriet W. Hanlon, a Northern Virginia educator whose doctoral work was in neuroscience. Hanlon and husband Bob moved to Reston on August 1, 1966.