Reston Has Always Inspired a Sense of Wonder

Myths & Monsters of Reston, Virginia, written by two Reston friends who grew up listening to tales of the Bunny Man, the Nudist Colony, and other mysteries helps us discover our own inner child.

From the Introduction of Myths & Monsters of Reston, Virginia:

“Ripe for exploration and best enjoyed with a sense of wonder, MacDicken and Alcorn encourage new generations to get outside, search for critters, peek into hiding places, and let their imaginations soar…” 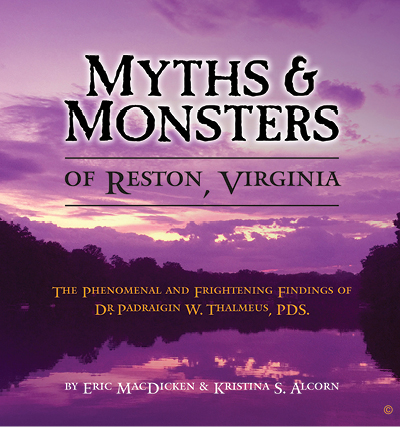 Thanks to the curiosity, energy and determination of longtime Reston resident and author Kristina S. Alcorn, the world has now been treated to the extraordinary life and big ideas of Reston’s founder. In her 2016 book In His Own Words, Alcorn invites us to listen in to hundreds of hours of intimate interviews with Reston’s larger-than-life creator, taped over a period of many years.

Those of us who thought we knew him well discovered intimate stories that we had never known ones that provided rich—and often rare—insights into what shaped Reston’s exceptional culture and renowned quality of life.

One who knew him better than most is Vicky Wingert, longtime Reston resident and former CEO of the Reston Association. “In his own buoyant voice, Bob Simon tells us vivid stories about his culturally rich Manhattan childhood, his trepidation at becoming president of Carnegie Hall at age 23, and his passion for creating an urban New Town from scratch in the woods and fields of Northern Virginia.”

Bob Simon loved children and was a colorful storyteller! Although he passed away [at age 101] as In His Own Words was being written, he would have clapped with delight at the imagination and creativity that Myths & Monsters of Reston delivers. He would have applauded the authors’ goal to encourage families to get outside and enjoy the natural beauty of Reston. It was one of the seven, original goals of his master plan: “Beauty is a necessity of the good life.”

He said that Reston was meant to be a place where nature would not just coexist with humans, but would thrive. Today, Reston residents and workers enjoy more than 1,900 acres of parks and permanent natural areas. Sixty-nine miles of pathways and underpasses wind through forests and wetlands, connecting homes to schools, shops, swimming pools, stores, ballfields, tennis courts and offices.

Authors Alcorn and MacDicken grew up along these pathways, playing as children in these woods and wetlands. So, it was natural for both to “search for critters, peek into hiding places, and let their imaginations soar,” as quoted in the book’s introduction.

“In His Own Words would not have been published if fate hadn’t intervened on a gloomy January day,” Alcorn recalls. “During a writing break, I found myself pushing an empty shopping cart around Target, pondering how to turn my unwieldy collection of digital files and photos into an actual, coherent, visually pleasing book.

“I found my answer in the cleaning supplies aisle. There, I ran into Eric MacDicken, a dear friend since our days at Langston Hughes Middle School. It had been a few years since we’d seen each other, but what could have been an awkward, ‘So, what have you been doing the last decade?’ conversation instead felt like no time had passed and led to a beautiful partnership.” 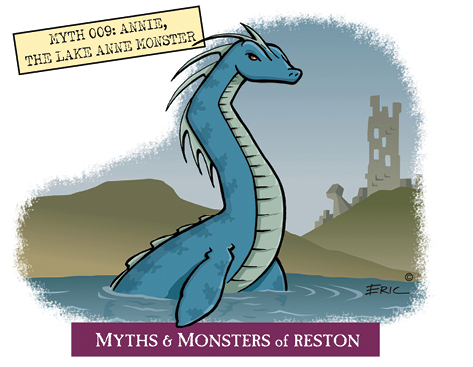 MacDicken, a writer, art director, designer, creative consultant and illustrator, helped Alcorn produce In His Own Words in time for Founder’s Day 2016. “We found working together such a joy that even in the thick of production we charted our next collaboration—Myths & Monsters,” MacDicken said. Alcorn adds, “As we talked, Eric had a seemingly inexhaustible enthusiasm for all things mythical and monstrous, as well as a love of nature.”

The two authors worked around the clock, especially MacDicken, who, in addition to writing, created the book’s illustrations and design. For both authors, inspiration to write the book appeared throughout Reston—the forests and hollows, the miles of walking paths, the dark-water lakes and mysterious creatures that must lurk below the surface, the troll immortalized in a woodcut on the Reston Museum’s window, and the ghost stories told to children to make sure they don’t stay out too late on Halloween—to name a few. Such an environment helped MacDicken and Alcorn bring to life some amazing yet little known creatures rarely seen in Reston, including the Tree Hole Troll, Zombie Cows, and Annie the Lake Anne Monster.

A quote in the Introduction, by Gigi Thibodeau, a writer and adjunct professor of English at the University of Massachusetts Lowell, provides readers with an intriguing opening for the book: “Myths explain the inexplicable: they give us meaning and purpose; they bind us to one another. The heroes and creatures of myths are as essential to our survival as the fires we light against dark and cold.”

Today, Alcorn and MacDicken are working on their next project—book two of the Myths & Monsters series. They can’t wait to share the continuing adventures of the book’s characters with readers, the young and young-at-heart.

Sep 27, 2022 / Comments Off on “Modern Illuminations – Knowledge and Power” by Rosemarie Forsythe Sep 01, 2022 / Comments Off on Tephra ICA Launches The Alloy Project