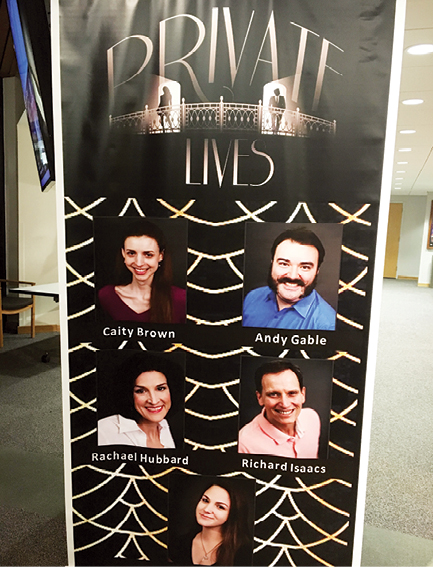 “Private Lives,” a Tony Award-winning play by Noël Coward, was presented in May under the keen direction of Adam Konowe, and with the skilled production of Laura Baughman.

With excellent production and impeccable acting and direction, the actors personify two newlywed couples who, with witty humor and sarcastic dialogues, imprint the twirls and turns inherent in romantic relationships.

First staged in the 1930s, the play starts when Amanda (Rachael Hubbard) and Elyot (Richard Isaacs), a divorced couple, accidentally run into each other at the same hotel where they are both honeymooning with their new spouses (Caity Brown as Sybil and Andy Gable as Victor.) After they realize they are still madly in love with their exes, Amanda and Elyot run away together, only to remember the very next day why they actually got divorced. Witnessed by Louise, a French cleaning lady (Lisa Young), the couple is caught by their new spouses at Amanda’s apartment.

“This is the second Noël Coward play that I’ve directed for the Reston Community Players, and I really appreciate the style of writing,” said Konowe. “It’s very reflective of when Coward was alive and was so popular in the period between WWI and WWII. What really is more rewarding is bringing that moment in time and putting it on stage because it’s so distinct … it’s such a snapshot of upper-class society in England at that time.”

Recreating the play on stage was  challenging as it was written with archaic words that are no longer part of modern vernacular. Making it look real and relevant was the greatest hurdle, and Konowe nailed it well.

Although at first sight the play could look superficial and trivial, the message beneath the scenes carries great depth.

“Coward was very clever at putting themes into his shows about relationships, sexuality, and everything else, so if you get past the jokes and look at what he’s trying to say, there is a lot of relevancy in today’s society,” said Konowe. “Taking people not by face value, not understanding their nuances, taking oneself too seriously … all those things can still be relevant today, and he’s wrapped it in a show that, almost 100 years later, still works. He wrote this play in four days—that’s remarkable. And there are so many words and situations that are repeated by different characters, and the more you work with the script, the more you realize that there’s so much there.”

At the end of the play, love remains above all, despite the characters’ failures. The richness of the dialogues and emotions make us relate to those characters who, by trying to live by the society’s rules and regulations, surrender to love.

“Coward was that way himself. He was gay and kept a lot of that repressed in the 20s, 30s, 40s, and 50s because there were limits to what he could get away with despite the star power that he had. He covers a lot in his different plays, whether it was love and relationships between generations, or even drug use,” said Konowe. “To think that he was doing that in the 20s, 30s, and 40s, when British theater was still highly censored, is remarkable.”

The team rehearsed for seven weeks and all of the talent were volunteers, including actors, technical crew, and designers. “They did a superb job,” said Konowe.

Adam Konowe has directed about a dozen shows for Reston Community Players, and “Private Lives” marks the end of his 25th season. Since the 1991-1992 season, he has also served as light designer and stage combat choreographer.