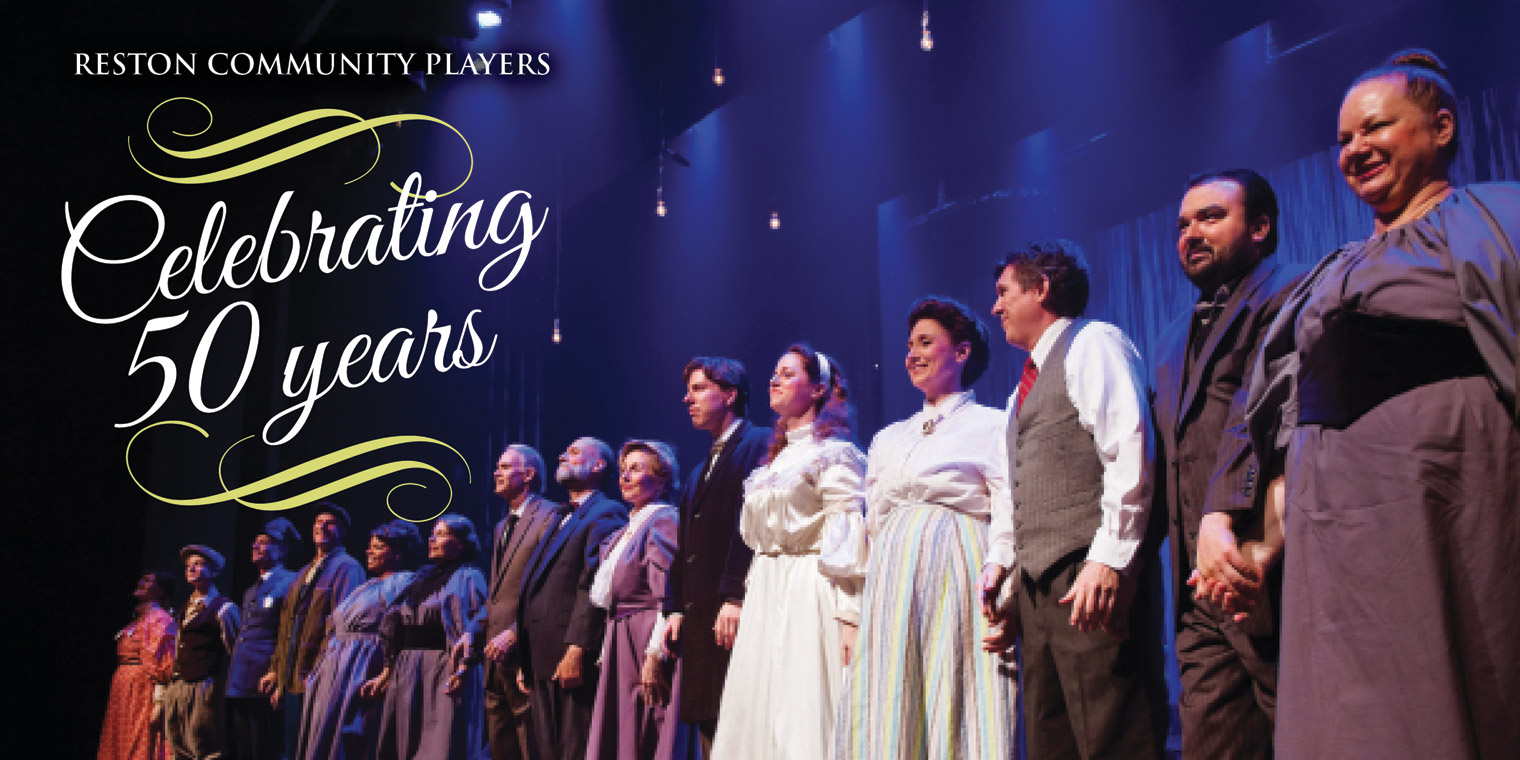 The Reston Players Organization was created in the spring of 1966, making it the oldest theater in Reston. The first show performed, The Greatest Game in Town, was an original musical comedy about the stock market. With a net profit of $200.00, The Reston Players Organization was born! Buoyed by this success, 500 shares of common stock were offered to Restonians at $10.00 per share to create and maintain a community theater. Only 200 families had settled in Reston at that time, however, all the shares quickly sold. In June 1966, the Reston Players became a for-profit entity incorporated in the Commonwealth of Virginia.

In the early days, Reston Players struggled to establish a consistent home for performances, set design/building, storage and rehearsals. The Players held their first performance at the South Riding Center stable, which boarded horses in stalls around the perimeter. The group then moved to the Lake Anne Community Center. When the Players could no longer manage set building at LACC, they moved to the Bowman Chapel near the A. Smith Bowman Distillery on Old Reston Avenue. They held performances at various Reston locations: The Reston Music Center, The Washington Plaza Baptist Church, and even in a giant tent in Reston Park.

In April 1972, the Bowman Chapel burned to the ground destroying everything the Players owned. Later that year, the Reston Players rose again with a new name, the Reston Community Players.

As Reston grew, plans developed for a full-service community center, which included a state-of-the-art theater. Opening in 1979, The CenterStage at the Reston Community Center has been RCP’s home ever since.

While the group now had a permanent home for performances, the Players still lacked a space to build sets and store inventory. From 1979 until early 1983, scenery was built in members’ garages and unrented rental spaces.

In 1984, Lindsay Petersen, Secretary of the RCP Board of Directors, purchased a warehouse in Herndon as an investment property, which she leased to RCP for a nominal fee. This property was converted into a scene shop, storage space, and the RCP rehearsal hall. When Petersen passed in 2002, she left the rehearsal hall to RCP, who now had a permanent home for set-building, storage, and rehearsals. 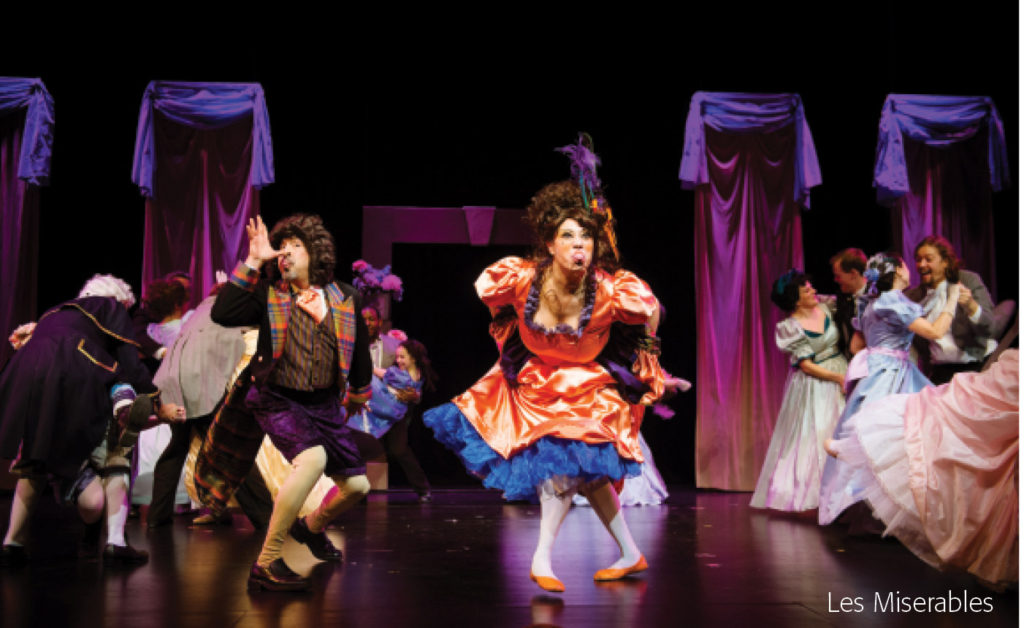 It has been an adventure for Reston Community Players over the last 50 years. They could not have done it without the help of the Reston community. Some ongoing challenges for the theater are finding volunteers, sponsors for shows, and additional donations to keep quality live theater in Reston. Thirty-year veteran, Sue Pinkman, of RCP stated, “I believe the future is bright! As long as there are people who want to express themselves onstage…and there will always be patrons who want to escape for a few hours into another world, while they are sitting in a dark theatre. Theatre should be accessible to everyone and is a combined creative effort of many people who want to share the experience with others.”

Sue Pinkman, who was president for 10 years and has held almost every position on the board, has acted, directed, produced, stage managed, sewn costumes, designed wigs, and even helped design the RCP logo. Sue stated,  “I drove down to a Virginia winery to collect 2 huge wine barrels for set pieces for Beauty & the Beast and discussed how to make the ‘break-away’ trousers for the male strippers in The Full Monty!” In 2009 she was honored to be named Reston Citizen of the Year, for helping to bring the live theatre to the Reston community for over 30 years.

Reston Community Players (RCP) Board of Directors feels strongly that the Players should give back to the community. RCP offers annual scholarships to area high school seniors who wish to study performing arts in college. To fund these scholarships, The Players conduct a 50/50 Raffle at each performance.

Reston Community Players brings to the public a variety of theatrical experiences including classics and original plays as well as popular Broadway musicals, dramas, mysteries, and comedies. Partially funded by grants from Fairfax County, in cooperation with the Arts Council of Fairfax County, RCP offers something for everyone, be it performer, designer, technician, or audience member. Some features include: 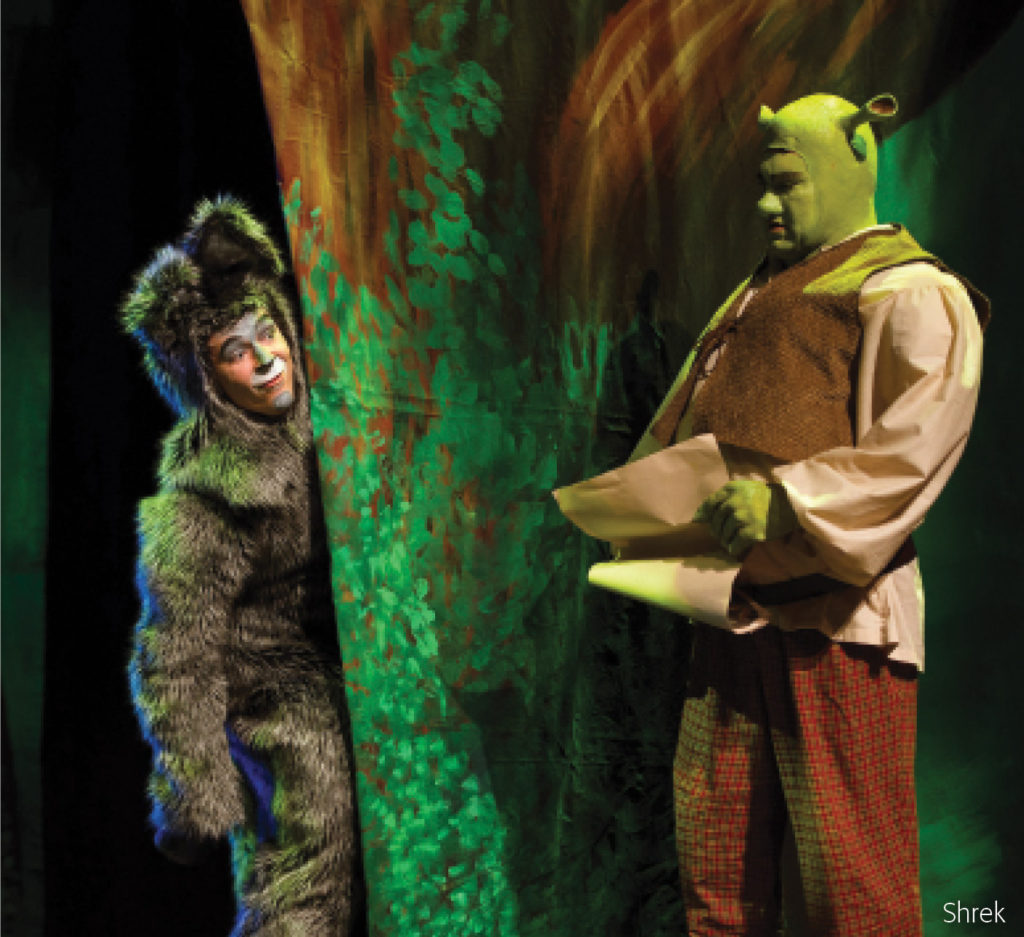 There is simply no better way to open the Reston Community Players (RCP) 50th season than with what has been called the greatest American musical—Gypsy! The play is based on the memoirs of the famous burlesque artist, Gypsy Rose Lee, and focuses on her mother Rose who is the ultimate stage mom. Theatre critic Clive Barnes described the character of Rose as “one of the few truly complex characters in the American musical… ” With a smart, funny, and gripping script; unforgettable characters; and some of the best music ever written for the stage; Gypsy is must see theatre. So, let us entertain you! Get your tickets now, and don’t miss the ‘mother’ of all musicals—Gypsy!

Gypsy will be followed by Vanya and Sonia and Masha…and Spike, a revised version of Chekhov’s play Uncle Vanya.  Tony-Award-winning playwright, Christopher Durang, transformed this play, thrusting it into the present day, and translating the quiet, bittersweet Russian characters into very modern American counterparts. The result is a comic masterpiece that Chekhov would never recognize. Vanya and Sonia, two middle-aged siblings, live quietly in the country until their sister Masha, a B-list Hollywood star, and her boy-toy Spike visit with a plan that will upend their existence.  Durang himself says, “I take Chekhov scenes and characters and put them in a blender.” Come and see the play the New York Times described as “deliriously funny!”

The next production will be Rock of Ages, nominated for five Tony Awards including Best Musical.  This show takes you back to the times of big ‘80s rock bands, with big egos playing big guitar solos, and sporting even bigger hair! Come rock out to the live band assembled on stage and enjoy your favorite songs from Styx, Whitesnake, REO Speedwagon, Pat Benatar, and Twisted Sister.  Aspiring rock star, Drew, and aspiring actress, Sherrie, try to prevent developers from turning the Sunset Strip into a strip mall.  Break out your air guitar and Aqua Net.

RCP closes their 50th season with Private Lives. First performed in 1930 in Edinburgh and revived numerous times throughout the decades, Private Lives is one of the most sophisticated and entertaining plays ever conceived. This quintessential comedy of manners was written in just four days by prolific playwright, composer, director, actor, and singer Sir Noël Coward. Elyot and Amanda, once married and now honeymooning with new spouses at the same hotel, meet by chance, reignite the old spark, and impulsively elope. After days of being reunited, they again find their fiery romance alternating between passions of love and anger. Their aggrieved spouses appear, and a circle dance of affiliations ensues as the women first stick together, then break ranks, and new partnerships are formed. Come see an enduring work from a man Time magazine hailed for “a sense of personal style, a combination of cheek and chic, pose and poise.”

RCP is a member of the Cultural Alliance of Greater Washington, a non-profit membership umbrella organization that unites the Metro DC arts community and provides services and resources to strengthen their organizations.

In 1999, RCP was one of 10 charter member theater companies that established WATCH. RCP is a charter member of Washington Area Theatre Community Honors (WATCH), an organization founded for the adjudication and presentation of annual awards recognizing artistic and technical excellence in community theatre throughout the metropolitan Washington, D.C. area.