On January 5, 2018, local resident and former Olympic skater Michael Weiss, 41, was elected to the U.S. Figure Skating Hall of Fame, accepting his award in a ceremony at the 2018 Prudential U.S. Figure Skating Championships in San Jose, California, surrounded by friends and family.

“When I was younger, my family traveled with me often—my mom, dad, sisters, aunts and uncles—so having them all come to the ceremony was reminiscent of my old competitive days,” Weiss said. “But since my daughter and son were younger when I was competing, they knew about the titles, but they hadn’t heard my training stories and how and why I started my foundation,” which Weiss related in his acceptance speech. Weiss resides in McLean with his wife and former choreographer Lisa and their two children, Annie Mae and Christopher.

Weiss was the first American to land a quadruple toe loop in competition (1999 World Championships). “I always wanted to push the bar technically. When competing against people like Todd Eldredge who were pushing skating artistically, I wanted to take it to another level and began trying to land the quad at age 18. When I was about 20 or 21 I could do them consistently in competition.” Weiss was also the first to do a backflip with a full twist on the ice (not allowable in competition, however).

Retiring from competing, Weiss skated in professional shows including Stars On Ice, and currently coaches hockey. His advice for local kids: “Get onto the ice and have fun.”

“Having fun is why I got involved in this sport,” he explained. “I loved the individuality, the speed I felt when on the ice, and the fact that I relied on myself. The things I learned through skating were important too, like how you had to deal with setbacks and failures in order to be successful. When I messed up, I took the blame, and went I did well, I took the praise.”

Weiss has been lucky to have a number of outstanding moments in his career. One of his favorites happened when being selected for his first Olympics team. “I was not really favored, but I had a shot at the team after winning the nationals in Philadelphia. I had been practicing the quad lutz all week, but nobody ever did it before and the judges told me I didn’t have to take the risk. But I was young, just 21, and I went for the quad as my first jump in the program. Everyone knew it would be the first time ever tried in a competition.”

Weiss was the first American to land a quadruple toe loop in competition (1999 World Championships).

“I built up speed, rotated four times, and the crowd just went crazy,” he remembered. “The hair on my arms and the back of my neck stood straight up. But I had to completely compose myself; I still had eight other jumps to do and had to land everything else. Immediately I had to refocus. I landed all the other jumps, and as I reached the final pose in the last spin, that’s when I knew I made my first Olympic team. Now when people asked me ‘Are you going to the Olympics?’ I could finally say ‘Yes.’” 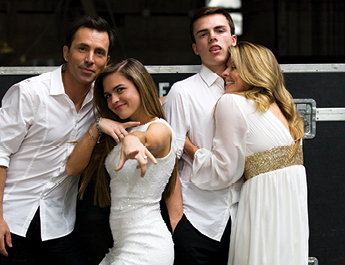 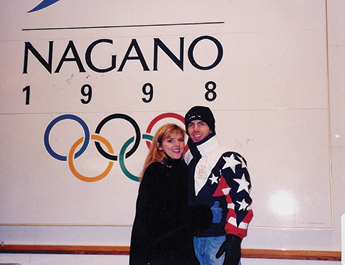 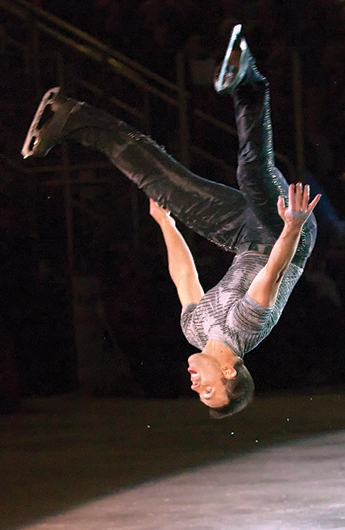 After retiring from competitive skating, Weiss has served as a figure skating commentator for NBC, ABC, Universal Sports and icenetwork. He also established the Michael Weiss Foundation that has awarded more than $850,000 in scholarship money to promising athletes to help offset costs of the sport.

“I started the Michael Weiss Foundation in 2003 to help financially support the skating careers of up and coming Olympic figure skating hopefuls,” Weiss explained. One of the skaters who benefitted was 2018 Olympic favorite Nathan Chen who wrote and said his skates were two sizes too small, and asked if the foundation could help get him new skates. “We’ve been supporting him ever since.”

“I was given a picture of Nathan at then age five doing a spiral on the ice, a position I couldn’t even hit—and I was in the Olympics! Now he does quads like I used to do triple jumps,” Weiss laughed. Among other skaters the foundation has supported are Olympians Ashley Wagner and Mirai Nagasu.

Growing up in Fairfax County, Weiss hails from a family of athletes. His father Greg was a 1964 Olympic gymnast, his mother Margie a national champion gymnast, and older sisters Geremi and Genna were a junior national silver medalist in skating and a junior world diving champion, respectively.

“When I was young, I started out as a diver, but at age nine told my mother I didn’t want to dive any more. She recommended ‘Why don’t you go with your sister to the rink.’ After seeing me skate, she said ‘You’re not the figure skating talent in the family; that belongs to your sister. Luckily being surrounded by a great coaching staff, I quickly picked it up.”

Nowadays, Weiss has his hands in several endeavors. In addition to coaching, playing indoor soccer and skating in an occasional charity event, he owns Weiss Design & Build, a custom homebuilding company. His wife Lisa owns the Wine Cellar Company that designs and builds wine cellars. He also owns and manages several rental properties in Reston.

The family plays together often, whether in their backyard basketball court, the basement synthetic skating rink or out on the soccer field. They also sing together, creating special musical tributes for Michael’s skating show routines. “It was a cool way to collaborate, with us all doing what we loved.”

“My family has been a huge part of my success and I am a stronger person when I have family around,” Weiss said. “It was wonderful to have them there at my Hall of Fame induction.”