David Baldacci’s Neighborhood: Where The Next Thriller Plot Is Just Around the Corner

You know him as a best-selling author of page-turning thrillers, with over 130 million books in print.  But it might surprise you to learn that David Baldacci lives, works and plays in in our community.  A native Virginian, he and his wife of nearly 30 years, Michelle, are long-time residents who have raised their two children in the area. It was a distinct pleasure, therefore, to have the opportunity to meet this well-known “neighbor” at his Reston office, which is equal parts writer’s retreat and literary power hub, a book-lined reader’s paradise that exudes the serene charm of a beloved bookstore.  We spent our time together talking about storytelling, creative inspiration and his newest release, Long Road to Mercy.

With 37 novels for adults and six books for younger readers published to-date, you might conclude that David Baldacci has been writing all his life, which isn’t far off the mark. Baldacci recalls fondly that his mother gave him his first writer’s notebook when he was just a boy in Richmond.  A way to record the stories that seemed to constantly spring from his imagination, as well as observations about the world around him, the habit of filling that notebook ignited a spark of creativity that helped the budding writer to emerge.

By the time Baldacci had graduated UVA Law School and moved to Washington, DC to practice law, he had turned his hand to writing screenplays, even securing an agent in Los Angeles, but failed to catch the attention of Hollywood.  “I suppose my stories were ahead of the trend when it came to the types of movies studios were interested in producing at the time”, Baldacci says, “so I switched from screenplays to novels.”

While he continued to practice law, he surreptitiously worked on his first novel, which was written, rewritten and polished over three years.  It was a story that sprung from an observation: “I was practicing law in DC and worked near the White House, where I would occasionally see the presidential motorcade and secret service agents, which, of course, gave me an idea.”

The finished manuscript was submitted to the (then) dozen or so publishers of note, with a cover letter promising them a read they wouldn’t be able to put down.  Sent as much in the belief that his work was as good as any thriller on the shelf, it was also a bold challenge to the editors he was sure would relish the opportunity to prove him wrong. It was Baldacci who was right—they couldn’t put it down—with every publisher vying for the rights to his first novel, Absolute Power (later to become a major motion picture starring Clint Eastwood).

With one book and a young family, Baldacci wasn’t completely sure he’d be able to make a career out of writing, so stayed with his “day job” at the law firm for another year before he finally took the plunge and became an author, full time.

Twenty-four years on, Baldacci says he’s never regretted the decision to seize “the chance to do the job I love”, where, for him, work is play.

The Making of a Storyteller

As to how his skills as a storyteller really developed, Baldacci readily points to his grandmother who lived with the family in Richmond and mesmerized him from an early age with stories of her home in Southwest Virginia. Also, it helped, he says, that his was an Italian family, full of colorful tales of their own, which further underscored storytelling as a integral part of everyday life and which he credits with helping to launch him and his siblings into professional and creative careers where good story telling informed and elevated their endeavors.

If the best attorneys are also good storytellers, then his years practicing law only helped him to further hone his writing skills, teaching him to be organized and disciplined and to take a long term approach to the process.  For Baldacci, there’s no perfect place or time to write.  Unlike authors who rely on regimented rituals and routines to get their words on the page, Baldacci is constantly writing in his head, finding source material all around him.  As he explains, “Some mornings all I have to do is open the blinds to find a story.” Great if you’re a prolific writer of best sellers, but given his proclivity for action-packed thrillers, it might make his neighbors a bit nervous if they knew.

“Inspiration comes every day,” Baldacci says, helped along, no doubt, by being an avid reader and a man with many interests and endless curiosity about what’s going on in the world.  He recognizes that breadth of knowledge is important to a writer, not only because it feeds the creative flame but because he’s repeatedly found that the most surprising of obscure facts can end up being useful in the most surprising of ways (and are often to be found sprinkled throughout his books).

Baldacci believes that it’s important to write what you know, but argues it is absolutely vital to write about what you would like to know.  “It’s the natural curiosity and reach for knowing that has fueled storytelling since the cave man; it’s what lifts and makes buoyant the prose and plotting of the best books,” he says.  From the outset of his literary career his novels have touched on important topics, because he’s a man who wants to inform and believes his stories should have a point, but his readers can always count on the boy in Baldacci to deliver a ripping good yarn.

For him, writing isn’t a hobby, or even a job, but a lifestyle that influences every aspect of his day-to-day life.  “I’m happiest,” Baldacci acknowledges, “when I’m in the middle of writing a book.  When I’m finished, I can’t wait to start the next one.” 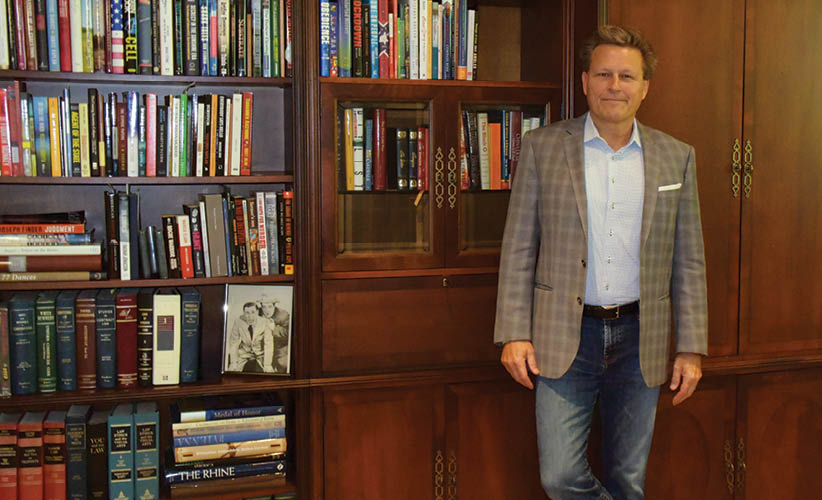 The Power of Place

As to the strong sense of “place” present in his stories – with so many of his books set in our own back yard of Washington DC and the surrounding Metro area – Baldacci explains, “It’s impossible to live in this area and not be struck by the vitality and energy that’s unique to it.  This is a place that attracts some of the brightest people, people with ideas and agendas, with the wish, and very often the power, to make things happen.”  And because this is the nation’s capitol, where actions have worldwide impact, the stakes are higher, making it the perfect setting for the thrillers Baldacci is most famous for writing.

As a life-long resident of Virginia, Baldacci finds that his Reston office and nearby home, just a stone’s throw from DC’s seats of power, serve not only as his family anchor but also as the source of ongoing literary inspiration.

With compelling plots and dynamic settings drawn from the surrounding milieu, his stories require no suspension of belief.  It’s seems only natural that many of Baldacci’s protagonists hail from the worlds of espionage or national and international policing.  Likewise, his peripheral characters just as believably are journalists, policy wonks and local law enforcement officers.  No contrivances necessary, these are the people indigenous to our unique metropolis.  Baldacci excels at creating charismatic characters that drive his stories and whose motivations, strengths and weaknesses consistently connect with readers.

In order for these characters to come to life on the page, however, Baldacci must be part fiction writer, part journalist.   He researches, digging deep to discover who these characters are and what makes them authentic.  But he’s no Wikipedia writer, happily glued to a computer.  Instead, he does his own legwork, meeting and interviewing the real-life prototypes of his characters, trying to do what they do, to better understand how these people react when under pressure. Baldacci stresses, “I interview dozens of people for each book and make it a point to travel, if at all possible, to the places that I write about.  But mostly, I just listen to people—that’s where the real stories are.”

Baldacci’s newest book, and the start of his seventh novel series, Long Road To Mercy, (which debuted on November 13th), is yet another challenge the writer set for himself to keep his storytelling fresh and timely.  Featuring his first female sole lead character, Baldacci explains that, “This book comes from my sincere desire to recognize and honor the

powerful women in my life—my mother, grandmother, wife, daughter, and female colleagues.” It also fulfills a long-held interest by setting the novel in the American Southwest.

The story introduces readers to FBI agent Atlee Pine, a strong woman in a traditionally masculine role, who finds herself not only the lone federal agent for hundreds of miles, but struggling with a personal past of loss and unanswered questions.

Women have always played a prominent, although not main, role in Baldacci’s novels, but whether as part of an organic evolution of character, or as a direct reaction to current trends that are moving women from the margin to the middle, Baldacci emphasizes that he “knew the time was right to portray a strong woman and for a forceful female character to take on the role of leading my newest series of thrillers.”

From his earliest days as a lawyer Baldacci observed “female colleagues with far more talent and intelligence, losing out to the men,” and knew they deserved better.  To hear Baldacci speak about Atlee Pine, it’s clear that, in her, he has brought to life a female character eminently capable of surviving in a man’s world.  This is someone that resonates with the writer, a reaction he’s confident his readers will share.

A large portion of Long Road to Mercy was written in his Reston office, although Baldacci admits that research for the book, coupled with a busy schedule that often included guest teaching, along with speaking engagements and book signings, left him writing, as is so frequently the case, “wherever the day and mood finds me.”

But that doesn’t worry the author, for, as David Baldacci likes to say, “How can I survive without writing?”

“I’m used to telling interviewers it’s whichever book I’ve just finished, as that’s the book you’ll find me most excited about at the moment, but to be completely honest, Wish You Well, my novel based on my grandmother’s life in the very rural Dickenson county in Southwest Virginia, is the book that has meant the most to me.”

“Whenever I’m at appearances or speaking engagements, there are always Camel Club fans wanting to know when the next book in this series will appear (good news: there’ll be at least one more to come).  There was one appearance where I spotted a particularly ardent “fan” among the crowd who had duck-taped a stuffed camel to the top of a pole, using it to urge me from the rear of the room, in his uniquely passionate way, to deliver more tales of the ‘Club’!”