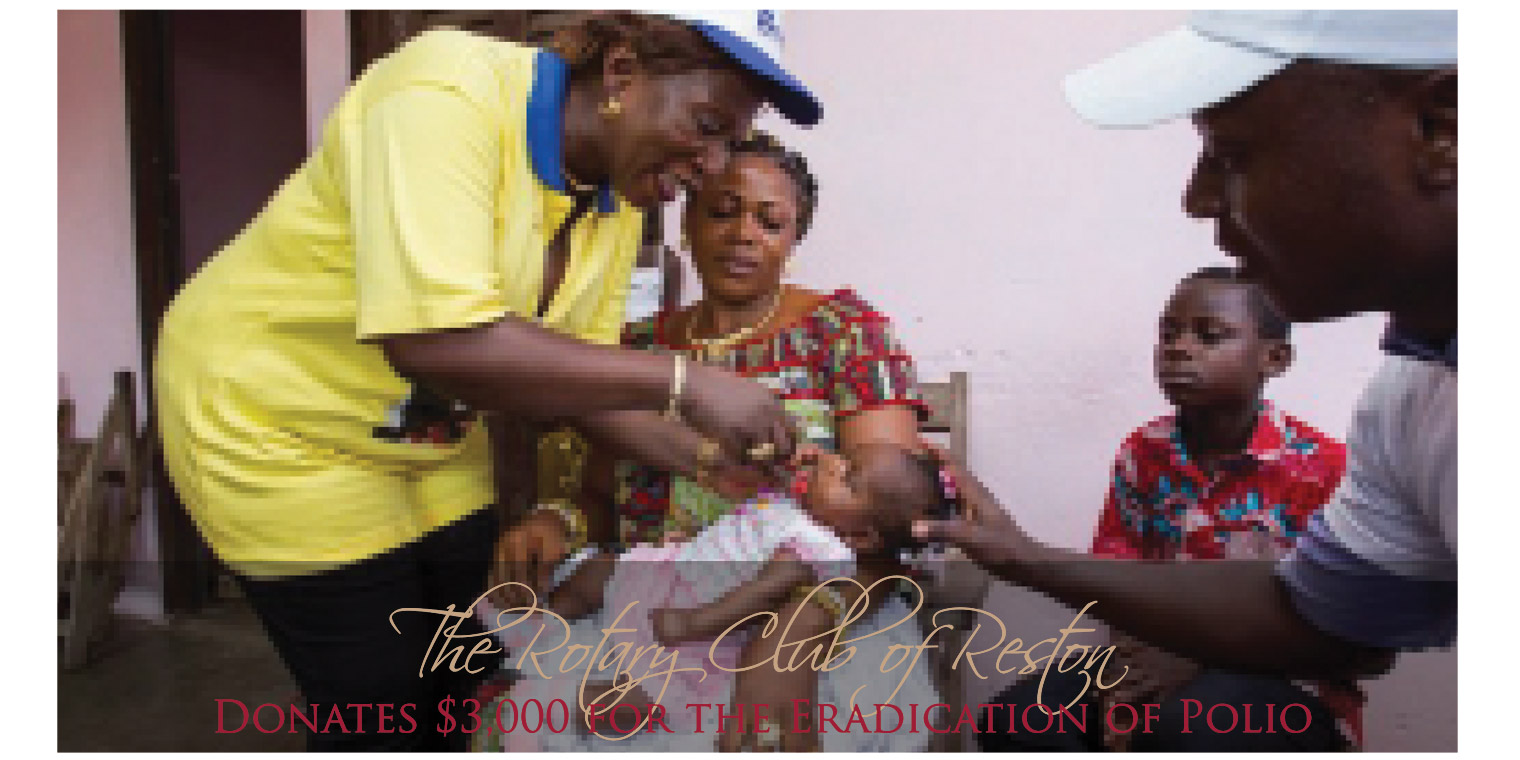 The Rotary Club of Reston Donates $3,000 for the Eradication of Polio

The Rotary Club of Reston announced that it has donated $1,000 to PolioPlus, a Rotary-led program with the express mission of eradicating the polio virus world-wide. This was matched 2-to-1 by the Bill & Melinda Gates Foundation, for a total gift of $3,000.

In 2015, the world saw historic progress against the paralyzing disease, with just two countries – Afghanistan and Pakistan—reporting a single strain of the wild virus. If the current momentum is strengthened, this year may mark the last case of wild poliovirus.

Nigeria—the last polio-endemic country in Africa—was removed from the World Health Organization’s list of endemic countries in September, following one year without a new case of the wild virus. The last wild polio case anywhere on the African continent was in August 2014.

In September 2015, one of the three strains of the wild poliovirus—Type 2—was certified as eradicated, with no cases since 1999. Type 3 has not been seen anywhere in the world since November 2012.

Pakistan, which continues to report the majority of the world’s polio cases, reduced its caseload by 82 percent in 2015 over the previous year.

To sustain this progress, and protect all children from polio, experts say $1.5 billion is urgently needed.   Without full funding and political commitment, the disease could return to previously polio-free countries, putting children everywhere at risk.

Rotary launched its polio immunization program PolioPlus in 1985 and in 1988 became a spearheading partner in the Global Polio Eradication Initiative with the WHO, UNICEF, and the U.S. Centers for Disease Control and Prevention, which was later joined by the Bill & Melinda Gates Foundation. Since the initiative launched, the incidence of polio has plummeted by more than 99.9 percent, from about 350,000 cases a year to 70 confirmed to date in 2015.

Rotary has contributed more than $1.5 billion and countless volunteer hours to fight polio. Through 2018, every dollar Rotary commits to polio eradication will be matched two-to-one by the Bill & Melinda Gates Foundation up to $35 million a year.