“It was the job that brought me here, but it’s the sense of community that kept me here”

Originally from Massachusetts, Robert Goudie moved to Reston from New York City in 1998 for job purposes. Being a general counsel for an international high tech company based in Europe, he purchased a townhouse at the West Market so that he could walk to his office at the Reston Town Center. Little did he know that this move would be the beginning of a life-changing experience for him and for the community of Reston.

“I was one of the people appointed by the supervisor to the special master plan study task force, that was looking at how we were going to re-plan Reston with the Metro coming,” he said. He served as the Town Center residential representative, and later he co-chaired a committee on that task force with Peter Otteni from Boston Properties, creating a report that the Board of Supervisors ultimately adopted. “We focused a lot on jobs to household ratios so that we could try to mitigate traffic, and what it takes to create dynamic communities,” he explained.

Art is a Necessity of the Good Life 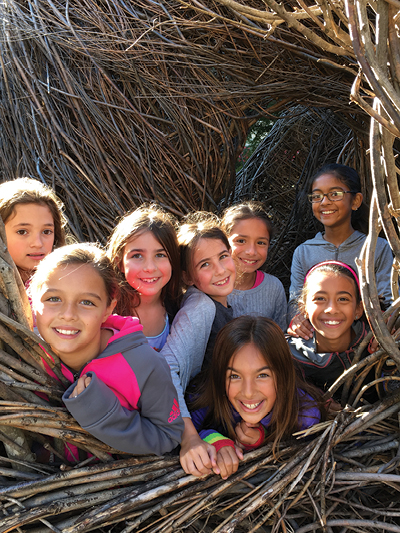 Goudie has also been involved with the Greater Reston Arts Center (GRACE) for the last four years as board chair.

“What GRACE is doing is not only consistent with Reston Founder Bob Simon’s original view of the Reston community, but no less than two of seven of his founding principles had to do with art; specifically, that art is a necessity of the good life,” said Goudie. “What we’re doing is not only furthering his vision, but also helping fulfill his notion of Reston being a complete community.”

After being in a difficult financial situation a few years ago, GRACE has rebounded and, for the first time, the arts center has reserves.

“We have completely reshaped the vision for the center, so we’ve built what we call the ‘Destination GRACE Vision’,” said Goudie.

Destination GRACE is an effort to add internationally recognized artists to the arts center in order to bring new audiences to the exhibits and the Reston Town Center. The first artist was the internationally acclaimed artist Patrick Dougherty, who put together his monumental sculpture “Bird in Hand” at Town Square Park at the Reston Town Center. The second was “Synthetic Transformations,” an exhibit by multi-media artist and 2014 TED Talk Fellow Shih Chieh Huang.

“We just smashed attendance records at the gallery when the show came up because it was interactive. When you walked into the gallery space, the sculpture could sense your presence, and it became animated,” Goudie said.

A third exhibit, “The Great Dismal Swamp” by the nationally recognized painter, sculptor, and mixed-media artist Radcliffe Bailey, opened April 21 and will be on exhibit until July 8.

“Bailey is in the Metropolitan Museum of Fine Art in Manhattan, N.Y., he has a piece that’s a part of the inaugural collection at the newly opened African American Museum in D.C., he had a solo exhibition at the High Museum of Art in Atlanta—one of the leading art institutions in the country—so we’re incredibly lucky to get him,” he said.

GRACE is also responsible for the Northern Virginia Fine Arts Festival, which will take place at the Reston Town Center on May 20-21.

“We bring more than 220 top artists from across the country,” said Goudie. “Last year, it rained quite a bit, but on a good year we generate more than 30,000 visitors over the course of the weekend. So, it’s not only the major fundraiser for the arts center; it’s a marquee cultural event on the region’s calendar.”

The arts center is also committed to bringing art to the elementary classrooms through its GRACE Art Program, where parents volunteer to present a different artist profile every month, and the children create a piece of art based on the artist’s style. The program is currently in 40 schools reaching 20,000 kids.

“At a time where art budgets are under pressure because public dollars are under pressure, we think this is a way to efficiently deliver art education and art history through enrichment experience to our elementary-aged kids,” he said. “We’re also really excited to be partnering with the Reston Association to provide the art summer camps through their summer camp programming.”

Planning Reston for the Future

Besides his contributions to Reston’s master plan and GRACE, Goudie works as the executive director of the Reston Town Center Association.

Through partnership with Boston Properties, Goudie works to put together a number of civic events at the RTC, including the Northern Virginia Fine Arts Festival, and he partners with the Greater Reston Chamber of Commerce to make events like the Taste of Reston and Oktoberfest a reality. He also works with the Reston Community Center to deliver a concert series of classical chamber music at the Town Square Park with the Shenandoah University Conservatory.

“We do the Washington West Film Festival. We also are involved with the holiday parade and the holiday events on Black Friday, ice skating at the pavilion, and the 5K runs,” he added.

Goudie said that the Reston Town Center will grow even bigger with the new RTC West, being built on Sunset Hills Road and Town Center Parkway by JBG Companies.

“Cooper’s Hawk Winery and Restaurant is coming as an anchor tenant, and other organizations have already signed, [including] a Mediterranean restaurant and retail opportunities,” he said. “The developers are putting in a one-acre central plaza that’s going to act as a main anchoring space.”

RTC West will be a 13.78–acre campus with three newly-renovated Class A office buildings and two multi-story parking garages.

Goudie said that the open parking lot on the corner of Sunset Hills and Town Center Parkway will eventually become an extension of downtown. 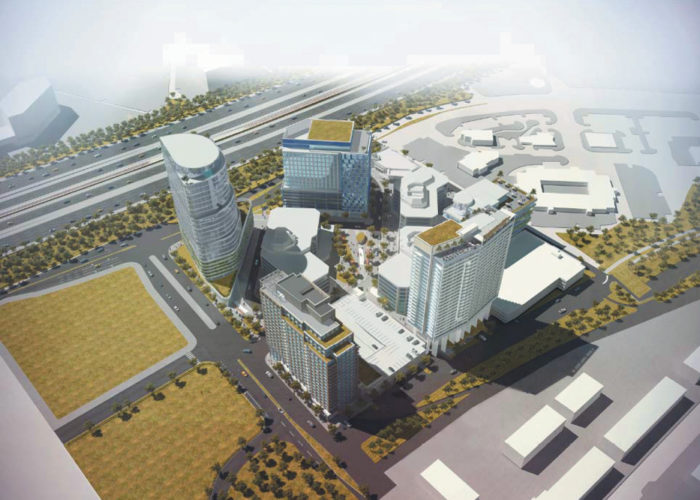 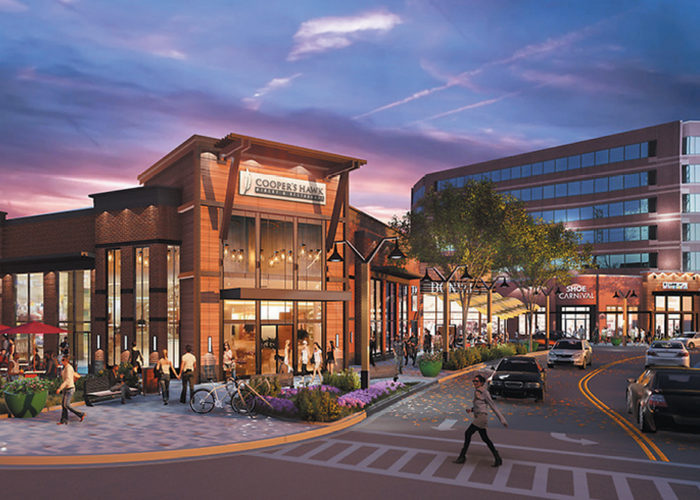 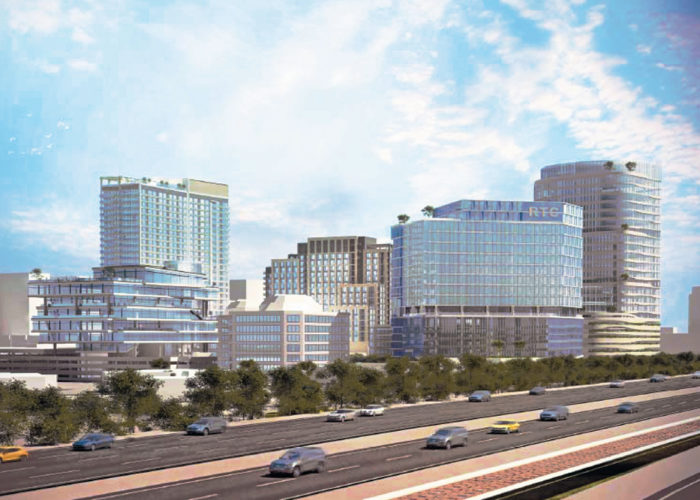 “I’ve seen some preliminary drafts, and I can tell you that they’re exciting,” he said. “The buildings are empowering. The architecture is beautiful, and it’s going to be great. It’s part of why I’m so excited to be here—we’re going through this transformation of Town Center 2.0 in a sense.”

“It will have the highest densities in all of Reston with buildings taller than [the ones] here in the RTC,” he said. “According to the plan [that] we helped put together, the idea is that this will be the densest of the three transit station areas along the Silver Line that are part of Reston/Herndon, including the Wiehle-Reston, the RTC and the Herndon/Monroe Metro stations.”

“With Metro coming out here, and as places grow in density, one of the consequences you’re going to see is an impact on the parking resource, which is scarce,” he said.

Goudie is very excited about the growth Reston is experiencing: “We have the Signature site being built at the RTC, we have RTC West, and we have Lerner’s redevelopment of Spectrum that is already approved by the County. That’s still several years away from what I understand, but that’s going to be terrific redevelopment.”

Goudie explained that the redevelopment of Spectrum will include 60 percent residential and 40 percent commercial spaces, a hotel, and a series of open spaces and pathways to get in and out of the site. Soon to be announced will be the RFP (request for proposal) for the redevelopment of Town Center North, to be located where the Inova Emergency Care, the Reston Library, and the Embry Rucker Shelter are currently located. “They’re ready to send out the RFP for that, which is going to involve creating a new library, new homeless shelter, all as part of the plan there,” Goudie said.

“Bob always expected that Reston would continue to grow; he was very much an urbanist at heart, he was a pro-growth person,” he said. “Bob was a part of the task force to his great credit, he served with all of us side by side, went to almost all the meetings, participated actively as only Bob Simon can throughout the taskforce process, and ultimately, he voted for the recommendations that we made to the board of supervisors to change the comprehensive plan.”

“With Metro coming here in 2020, we projected that over the next decade or two, the existing ‘town center’ will double in size. This is an incredibly exciting time—just as I think Town Center is stronger and more interesting today than when I moved here 20 years ago, so do I also think that it will be stronger and more dynamic still as we embark on this new phase of Metro-related growth.”