Reinventing Education – Berthold Academy for the Gifted and Talented

“The loneliest time of my life—the point at which I rejected school and began questioning everything—was when I was 15,” says Garrett Wilhelm, Co-founder and Head of School at Reston’s Berthold Academy. “I remember the day everything changed…the sound of my footsteps dragging slowly down the hall as I approached the principal’s office, the shock of seeing my mom and brother there waiting, and the words echoing through the room as they told me my father had died.”

What happened afterward shaped Wilhelm’s beliefs about education and played a pivotal role in defining his life’s work. Or maybe it’s better to say, it’s what didn’t happen. “After that meeting, no one at the school mentioned my father’s death again—no teacher, no counselor, no administrator. It was as if this life-changing experience was completely separate from my education, as if it shouldn’t affect the many hours I spent there each day. But of course it did. I’d been an ‘A’ student, but over the next few years my grades plummetted. I fell through the cracks, right here in Fairfax County. No one asked why. No one reached out to help me reconnect to learning and feel a sense of purpose once again. When I left school, I joined a band, started traveling and thought I’d never look back.”

“The most powerful force in a school is connection.”

What gets lost for a child in the educational system (or for us, as adults on a career path) when we haven’t the time or skills to serve the deep need for human connection? When sharing the struggles, fears and joys of life becomes less important than meeting the demands of a busy schedule and achieving one goal after the next? When we no longer see the individual because we are so focused on the system? The loss goes far deeper than grade point average, college opportunity, or career advancement. It’s a human cost we can’t measure with our minds, but can feel in our hearts. We risk losing passion and potential.

And yet, it isn’t an overstatement to say that Wilhelm’s painful experience in school became the driving inspiration behind his approach to teaching and administration. Rather than walk away from education forever, as so many might, he returned to the area and dove back in, intent on revolutionizing it. And now, he is working to do just that as Head of School for the academy he co-founded with Rodney Berthold, who is also a passionate, highly experienced educator and CEO of the school that bears his name. 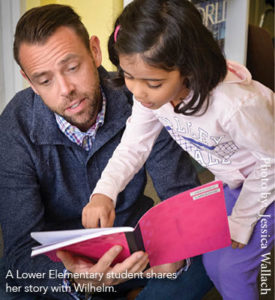 Wilhelm and Berthold both value the personal connection they have with students, and see it as central to educational success. “Over the years, I’ve had so many meaningful experiences with my students…felt connections that I never had in school when I was growing up,” Wilhelm says. He speaks of a young boy he taught early in his career, who absolutely refused to come to school. “I arranged my schedule so that I could go to his home every morning and play Legos. We built a foundation of mutual respect in those quiet moments together and, within a month, he decided to give it a try. He showed up at the school one morning with a smile on his face.” He remembers a teenager, a girl he’d taught in preschool, who came back to pay him a visit just to tell him that, after all this time, he was still her favorite teacher. “Last week at Berthold after our daily yoga session, a child opened up to the group, telling us how safe he felt in our enviroment, how grateful he was to come to school and not have to worry about being bullied.”

Wilhelm wants parents, teachers and the community here in Reston to remember the importance of connection, to understand how it powers our educational system far beyond anything that test scores and technology can provide. “Those things have their place, and we’re forming a pioneering partnership with tech innovator AltSchool that I firmly believe will re-shape how we do education in this country,” says Wilhelm. But they are not, he feels, the most important things.

“The most powerful force in a school is connection. Connection is what furthers us as a society. It’s what helps us all learn and grow. We’ve entered a time of rapid technical progress, increased virtual communication…Facebook, Twitter, sensationalized media…but it’s not real. It’s a projection of a persona within a virtual space, where we see only what someone wants to reveal about themselves.”

Likewise, we’ve accepted the abstraction of test scores as a primary measurement of growth in school. But tech and tests are only tools. They’re not the essence of who the person is or the foundation of learning. “Pushing scores higher, using technology to deliver more information faster—it’s not the same as looking into a child’s eyes, listening to their hopes and concerns, understanding what they need to get past a particular obstacle so that learning and growth can be ignited…so that they become all that they were meant to be.”

To learn more about Berthold Academy for the Gifted and Talented’s Montessori-based program, as well as their innovative partnership with AltSchool, go to:  www.bertholdacademy.com. 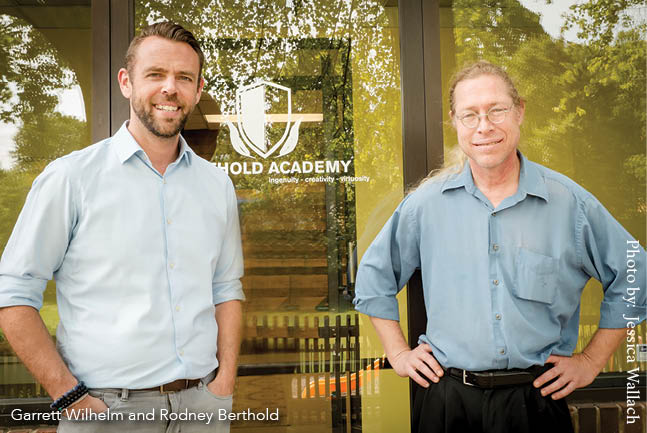 Rodney Berthold (Founder/CEO) and Garrett Wilhelm (Co-founder/Head of School) together have over 40 years of experience teaching and directing Montessori-based educational programs, and through their AltSchool partnership they intend to modernize it. Berthold Academy emphasizes:

the quality of being clever, original, and inventive.

Berthold Academy believes in the power of originality.  Traditional education requires the child to think in a singular way—to memorize information and regurgitate it for evaluation—rather than giving each person the time needed to fully explore what they are learning.  Students at Berthold learn through engagement, repetition, failure and discovery.

the ability to transcend traditional ideas.

There is more than one way to complete any task. Students are guided to develop leadership qualities and are encouraged to be innovative in their thinking. They are offered an academic education of the highest caliber, while being given the opportunity to define who they are and where they excel.

the quality of having special knowledge or skill in a field.

Through keen observation and conversation with guiding adults, each student’s unique area of excellence is discovered and honed. Berthold Academy believes in encouraging students to pursue their unique talents to the fullest extent.