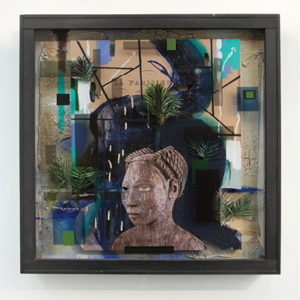 Radcliffe Bailey is a nationally recognized painter, sculptor, and mixed-media artist who layers imagery, culturally resonant materials, and text to explore themes of ancestry, race, and memory. The Great Dismal Swamp is the artist’s first solo exhibition in the D.C. metro area. He has previously participated in group exhibitions at the Smithsonian Institution, the Corcoran Gallery of Art, and the David C. Driskell Center at the University of Maryland.

Bailey has long treated issues of race and the historical experiences of African-Americans in his work, exploring his personal ancestry as well as the history of slavery. At GRACE, Bailey will present a selection of mixed-media works mining historical themes, including the Underground Railroad and the legacy of slavery in Virginia’s Great Dismal Swamp, a federally designated national wildlife refuge in southeastern Virginia. The Swamp concealed and sheltered communities of slaves fleeing captivity on the Underground Railroad. 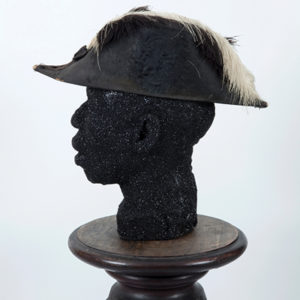 “Viewing Radcliffe’s work is like digging through strata of history, encapsulated in lush layers of paint, embodied within evocative objects, or reflected in found images of African-Americans,” observed guest curator Holly Koons McCullough, formerly of GRACE and now executive director at the Arlington Arts Center. “This body of work is underpinned in part by the artist’s own family history in Virginia, which was the home of both his father and grandfather. Although deeply rooted in his personal and cultural heritage, Bailey’s work ultimately addresses universal themes of identity and ancestry, hurt and healing, displacement and endurance.”

GRACE’s executive director and curator, Lily  Siegel, adds, “We are thrilled to be presenting Bailey’s first monographic exhibition in the D.C. area. It is a perfect fit for the Greater Reston Arts Center as we continue to grow and present excellence in national and international contemporary art that has deep relevance for the region.”

Bailey received a BFA in 1991 from the Atlanta College of Art. His work is included in the collections of the Metropolitan Museum of Art, New York; the Smithsonian Museum of American Art, Washington, D.C.; the Art Institute of Chicago; the Museum of Fine Arts, Houston; the Nelson-Atkins Museum of Art, Kansas City, Missouri; the Denver Art Museum; and the High Museum of Art, Atlanta; among many others. The artist is represented by Jack Shainman Gallery, New York. Born in 1968, in Bridgeton, New Jersey, he now lives and works in Atlanta.

Radcliffe Bailey: The Great Dismal Swamp is funded in part by the Arts Council of Fairfax County.