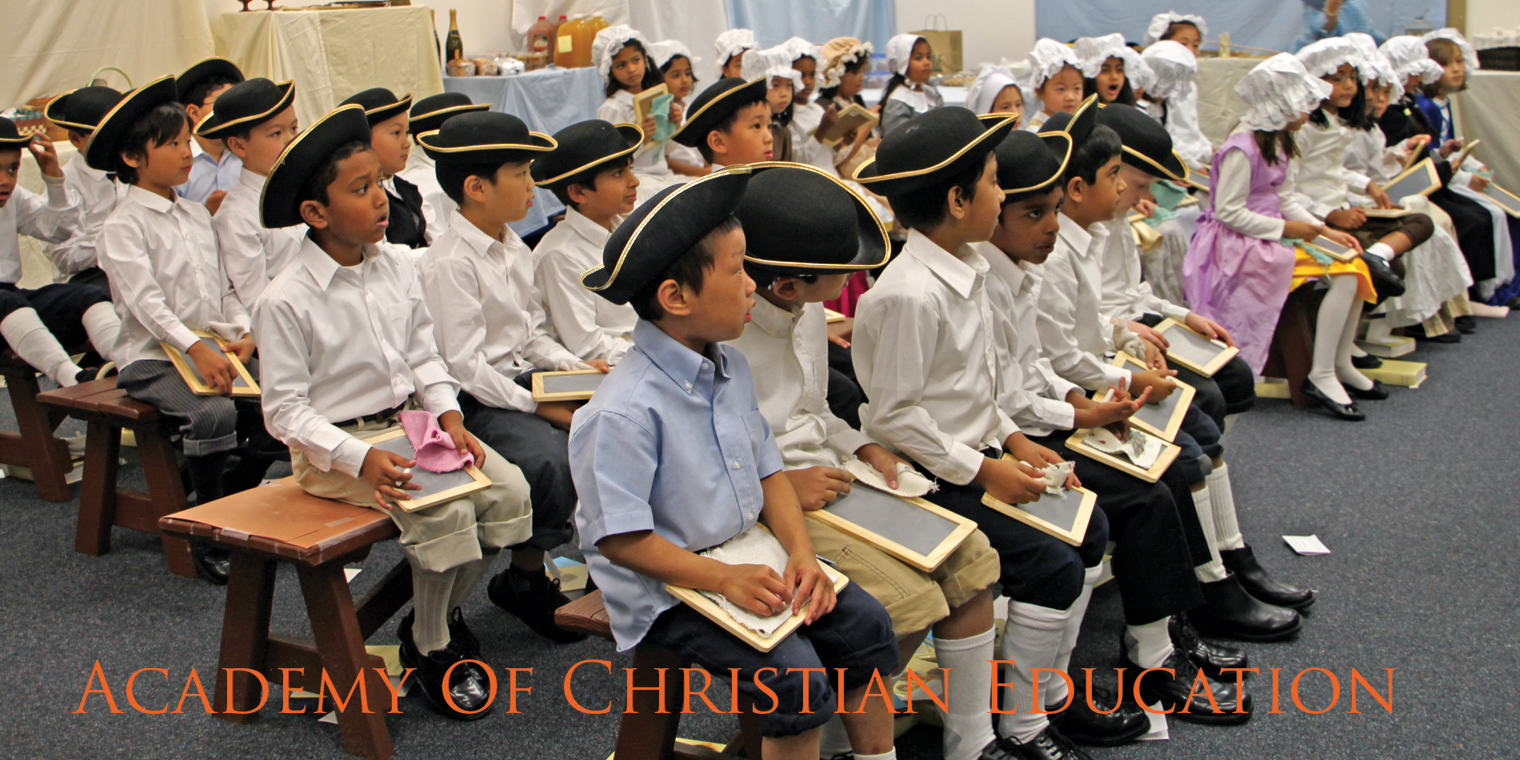 What could be better for parents than seeing their child loving school and learning advanced academics, while developing a compassionate heart and good character? Those are the teaching cores at the Academy of Christian Education (ACE) located in Reston since 1996.

Children at ACE thrive in academics, learning at least one grade—sometimes two or three grades—above their level. They also learn, through hands-on experiences, to care about others, help those in need, and to be compassionate. They are taught to be independent and good decision-makers to prepare them for the future.

“Mrs. Russell had the original vision for the school,” said Mrs. Strater, director of ACE. “She came to me and said, ‘I feel that God has given me a vision to start a school.’ We were at that time working at another school that was sold, so we started ACE.”

Mrs. Lee was one of the founders and she was the kindergarten director several years before she retired five years ago.

Today, ACE has almost 200 students ranging in age from toddlers to third grade, with a fourth grade scheduled to open in September 2016.

“Over the years, there has been a lot of variations to the school,” said Mrs. Strater. “We always try to listen to the needs of our families. At the end of the year, we debrief our staff and ask, ‘What are the best things we’ve done this year, and what do we need to improve?’ So every year, we try to do something better than last year. This keeps the school current and fresh.”

The program has also changed during the 20 years since it was founded. ACE wasn’t created as an accelerated program school, but teachers started noticing that children learned at a pace faster than what that the curriculum mandated.

“We found that teachers had finished their curriculum early, so we gradually started moving the curriculum down, one subject at a time,” said Mrs. Russell. “This way, the children can be challenged academically. Our kids thrive on that; they can do so much more than we ask them to do, and I think that was a major element in our evolution.”

With students from a variety of backgrounds, the school celebrates many cultural days with fun activities so that children can learn more about their classmates. These include the Lunar Year celebration, when children go to school dressed in Chinese attires. They also have special food and games, Chinese dancers, and a calligrapher. The school also celebrates an Indian cultural day, and the children can dress in Indian clothing, eat native foods, and enjoy music, crafts and games.

“The entire staff dresses up. I even wear a sari,” said Mrs. Strater. “This past year, we had a Bollywood dancer who came in and taught all the kids to dance.

“We also celebrate our own American culture, so in the fall, we hold a Harvest Festival, when we act out the different historical eras of America,” Mrs. Strater added.  “These include Colonial School Day, the kids come to school wearing Colonial clothing and they bring lunches that represent the Colonial era; and Civil War Day, when kids dress in Civil War clothing. They of course all study these periods before we have these days. One group focuses on pioneers, and they play games that kids played in that era, and they get the kind of treats kids got in that era, as well as the kind of toys they had, so that the kids can learn while having fun.”

Learning while having fun

“We’re pretty serious about learning here,” said Mrs. Strater.  She affirms that having an accelerated curriculum takes a certain level of dedication, energy, and serious pursuit, so the staff works hard in order to make the school experience fun.

In order to accomplish that, the school holds special events all year long. On one occasion, they brought an animal expert with a 20-foot long boa constrictor to teach kids about reptiles. The students also go on three or four field trips during the school year to learn about science, history, and culture.

The results are tests that score two to four years ahead of the child’s grade level. “The children are getting an education, but they’re having fun doing it, and that was an important element when we started the school. We said, ‘We want to provide the best education in Northern Virginia,’ and we’ve tried every year to make that come true,” she added.

Having a better education also boosts the children’s self-esteem, as they feel proud of themselves when they achieve their goals.

“We want them to not only be strong at academics, but also to have ethics and proper understanding,” said Mrs. Russell.

ACE also participates in various programs such as science fairs and World Education Games through UNICEF. ACE students internationally ranked in the top schools for the worldwide competition in the subjects of math, science and literacy.

“All of these programs are developing persistence, grit, and encouraging students to go above and beyond,” a parent said. “Every year, my daughter looks forward to participating in the Good Samaritan program to send a box of toys and treats to a boy or girl her age. Having to relate to another child in need has taught her to be compassionate and caring.”

Through different activities and Bible reading, children at ACE learn how to be compassionate, forgiving, and caring, as well as to make wise decisions. The school day starts with Bible class, which includes the pledge of allegiance to the American flag, a patriotic or Christian song, and prayer, followed by a Bible story and a gospel message.

The school welcomes children from every religious background without requiring a parent to be a Christian.

“Their approach to Bible studies is welcoming, unassuming, and inclusive for non-Christian families like ours,” added one parent.

This year, ACE students participated in the Geography Bee and brought home three blue ribbons and one red. Next year, they will go to the Spelling Bee and Math Olympics as well.

“In the World Education Games, we placed third, fourth, and fifth in math science and literacy internationally,” said Mrs. Russell.

“We were rated as one of Johns Hopkins’ top schools. This year, we have kids in the third grade doing sixth-grade math,” added Ms. Russell.

The Summer Camp at ACE is open to children either enrolled or not enrolled at ACE during the school year. This year, the camp is STEAM-oriented and includes Science, Technology, Engineering, and Art & Math weeks. Kids enjoy a water day and fieldtrips every week, including trips to the Richmond Science Museum and Route 11 Potato Chip Factory, among others.

A farewell and a new location

As the school celebrates its 20th anniversary, there are big changes ahead.

Mrs. Strater, co-founder and head of the school, will retire at the end of this school year and will move to the Shenandoah Valley. Her position will be filled by Mrs. Kristen Rogers, who has served as the school principal for several years.

In addition to a new head of school, ACE will move into a new facility for the next school year. The new building, also in Reston, will have more space to accommodate the growing school.

“We’ll have bigger classrooms for specialty classes so that children can have their own spaces; new technology; and new programs. We will also have computer and iPad labs,” said Mrs. Rogers.

The new location also has a new playground, more classrooms, and an assembly area/gym.

For more information about ACE or to enroll your child in the school program or summer camp, please visit www.MySchoolACE.com or call 703-471-2132. Three Appointed to RCC Board of Governors

Oct 13, 2022 / Comments Off on Three Appointed to RCC Board of Governors