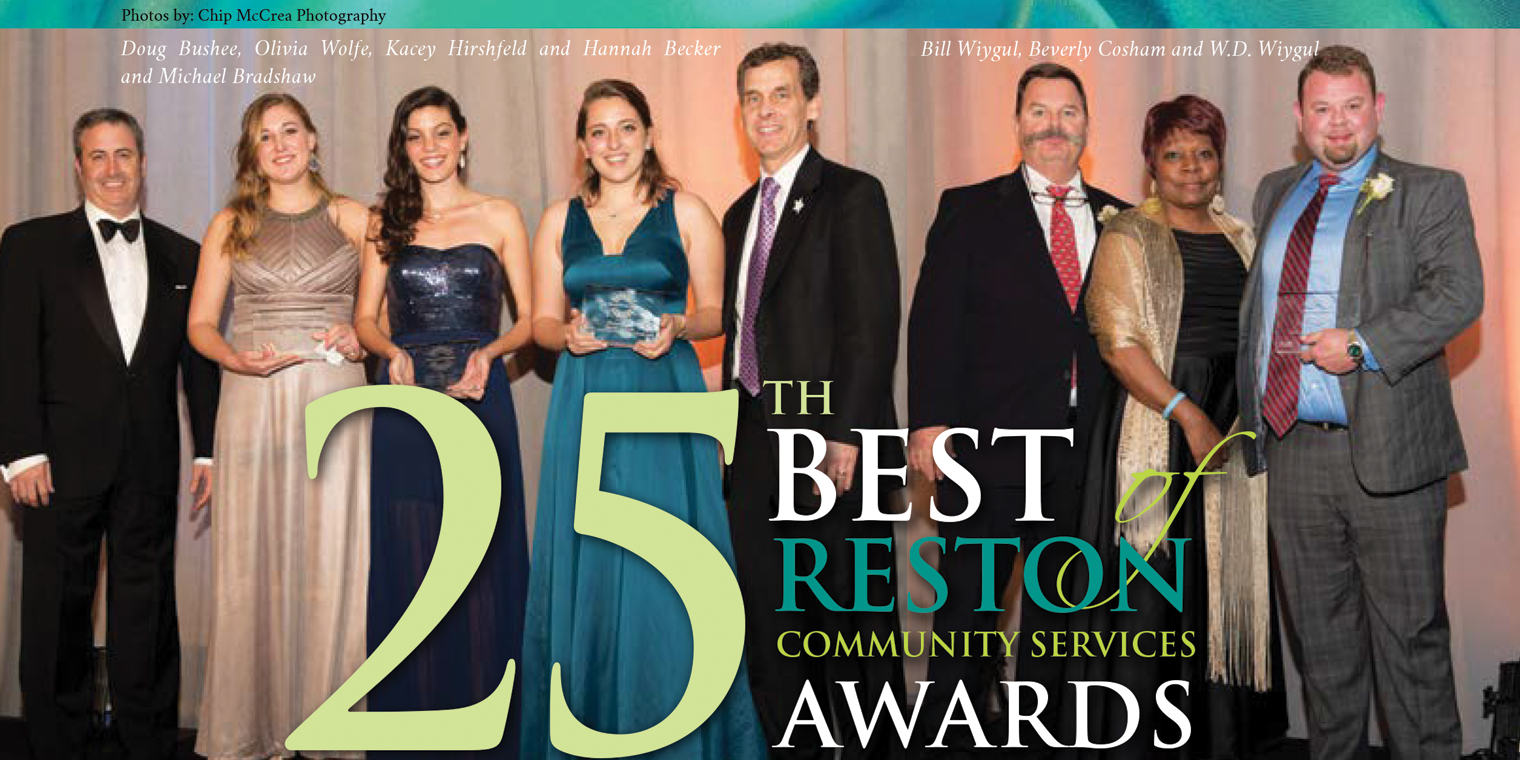 A Tribute to Bob Simon was held at the event

The 25th Anniversary of the Best of Reston Community Services Awards, presented in partnership by Cornerstones and the Greater Reston Chamber of Commerce, was celebrated on April 7 at the Hyatt Regency Reston.

A $483,258 check, funds raised through this year’s Best of Reston event, was presented to Cornerstones to support the organization’s strategies of starting individuals on a pathway to sustainable living-wage employment, and to identify and address other barriers to move from surviving to living prosperous, healthy lives.

The evening began with performances by the Reston Community Center’s Young Actors Theatre Vocal Ensemble, under the direction of Rita Gigliotti and Sarah Milhoan, which included the singing of What a Wonderful World, the Star Spangled Banner, followed by the National Anthem.

Phil Tobey (2001 Best of Reston Honoree) returned as the Master of Ceremonies, joined this year by Joseph Dagbe, Laurel Learning Center graduate and Langston Hughes Middle School student. This was Joseph’s second stand-out performance on the Best of Reston stage, the first performance being part of the 2014 Best of Reston 100th birthday tribute to Robert E. Simon.

A particularly poignant presentation at the event was the Best of Reston Robert E. Simon Fellows “Because of Bob” tribute to the late founder for his vision, spirit, compassion, and belief in giving back. Simon Fellows include: William G. “Bill” Bouie (2013), Joseph L. Ritchey (2009), Lynn Lilienthal (2015), Jim and Karen Cleveland (2011), Charles A. “Chuck” Veatch (2010), Priscilla Ames (2011), who was recognized in memoriam.

“That is why this evening is so important. In the stories of those we honor this evening, in our unified celebration of their contributions to the greater good, we come away a better people and a better community. The funds raised tonight will help provide shelter for the homeless and equip children to succeed in school and in life. Parents will find better jobs to support their families and contribute to the economic success of our region. As a result, we are a stronger community,” said Kerrie Wilson, CEO, Cornerstones.

“We are overwhelmed by the generosity of this community as we set out to raise contributions for this event. The Chamber treasures the powerful partnership that is alive today with Cornerstones. As we look at the future, we are excited about the possibilities and about the next generation of leaders,” said Mark Ingrao, CCP, CAE, President & CEO, Greater Reston Chamber of Commerce.

Vade Bolton-Ann Rodriguez Legacy Award: Kacey Hirschfeld, Olivia Wolfe and Hannah Becker of Amy’s Amigos. Given to only two individuals since its inception, this award honors acts of volunteerism and leadership that motivate and inspire a new generation of leaders and create a legacy of service. Amy’s Amigos was recognized for channeling grief into ongoing action, modeling wellness and service, and for passing the leadership torch to the next generation of Reston’s leaders.

The Small Business Leader Award: Maryam Ovissi of Beloved Yoga for inspiring community well-being and ensuring tools for self-empowerment, self-healing and self-realization are available to everyone in our community.

Small Business Leader Award: Wiygul Automotive Clinic. Their key to life and business is defined by a simple but compelling philosophy: “Never Lie, Cheat or Steal—Ever.”  This practice has paid off for the Wiygul family in its 60 years in business, along with another core value, giving back, to jump start hope for families and children in the community they serve.

Civic-Community Organization Award: Katie Shaw of Friends of Reston Community Projects.  For bringing together an impressive group of volunteers who have taken Robert E. Simon’s vision and “get to it-ness” to heart. They have operated under the radar, but the impacts of their $2.1 million investment and hands-on volunteer hours make them hard to ignore. These friends rolled up their sleeves, pulled on their boots, and took to the trails to answer the needs they saw for keeping Reston’s environmental promise and natural assets alive for all to enjoy.

Individual Community Leader Award: Jim Elder. As any parent of a youth athlete, or any person who has ever competed, coached or officiated knows, the story that plays out on the field is influenced by a number of things. Jim was recognized for teaching Reston youth that good sportsmanship and fair play are as essential to playing the games they love as skills, stats and strategy,

Corporate Business Leader Award: Bechtel. A world-class business, it’s no surprise that Bechtel also goes big when it comes to promoting community engagement. It created an “Employees Club” to give staff a place to bring their purposed-driven interests and passions to Reston, the Dulles Corridor and the world.

Individual community Leader Award: Leila Gordon, one of the most well-known people in Reston. For rarely stopping to take a breath between projects and convening partners for initiatives critical to community. Leila’s contributions go well beyond the scope of a day job that simply provides a stage for giving all who live, work, play in Reston a way to live with compassion and creativity.

Talk to the Animals